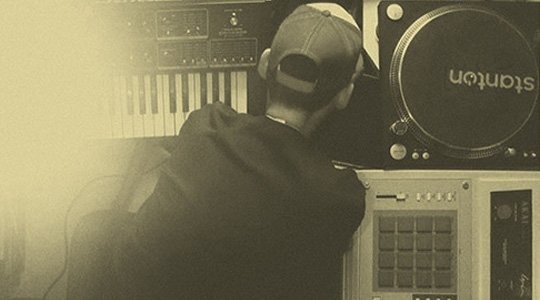 The late 1990s and early noughties were a rich period for hip-hop in the North West, with Grand Central Records, Friends and Family and Fat City Records forming a Holy Trinity of new-school cool. One of the leading lights from this era was Aim. Record shop owner, music enthusiast and Hacienda goer turned poacher with an MPC, Aim’s debut Cold Water Music served notice of a musician capable of sampling esoteric and forgotten sounds and crafting them into an atmospheric soundscape that stretched the listeners emotions.

His follow up Hinterland built on this blueprint. With a bigger budget and a burgeoning reputation that allowed him to collaborate with the likes of Diamond D, Souls of Mischief and Stephen Jones, the album’s ambitions are best summed up by the tracks Fall Break and Vipco; grand cinematic pieces that to this day remain crisp and distinctive. His third release, Flight 602, was released on his own label ATIC Records, and was his final act as a solo artist before he vanished into the musical gloaming, contending himself with the challenges of label management and producing artists on his roster. 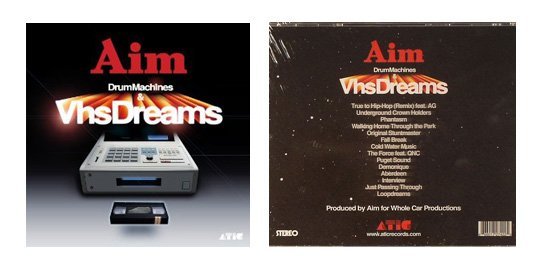 I recorded this mix in 1993 and it has pretty much all my favourite hip-hop tracks up to that point. So Nas, Casual, Kool G Rap, I’d love to work with any of them

After this period in his very own hinterland, Aim is back and to coincide with the release of his Best of LP, Drum Machines and VHS Dreams, we got together to discuss his Northern roots, VHS memories and his beloved MPC.

Aim was also kind enough to contribute his 1993 mixtape Blunted Volume 2 to our Bonafide Beats series. A mixtape in the truest sense, Bonafide Beats #52 is a primer for a musician with impeccable taste when it comes to what goes on the boombox.

Drum Machines and VHS Dreams is coming out shortly. What was going through your head as you put the compilation together? Were there any surprises and what do you hope it says about your sound?
Rather than putting out a chronological, disco-graphical, all-encompassing box-set overview, or just my best selling tracks, I decided to approach the album as if I was putting a tape together for myself and just pick my favourite tracks… the ones that have stood the test of time. It was really important that it flowed as an album and felt like its own thing rather than a compilation. Barring a couple of last minute flip-flops it all came together pretty quick.

I left out some top vocal tracks featuring artists like Souls of Mischief, YZ and Stephen Jones, as they either didn’t suit the vibe of the album when you listened through it as a whole, or on listening back my production wasn’t up to scratch. Three or four vocal tracks did make the cut but obviously instrumental music leaves more to the imagination and I wanted to lean that way with this album.

The tracks I picked best represent what I’ve been trying to do with my music since the start. I’m happy how it turned  and now I can stop looking back at old music and focus on the new material I’m working on.

I also remember a friend had Alien on tape and we’d rewind and slo-mo and pause the chest bursting scene over and over till it pretty much wore out..

The MPC is obviously an important tool to you, when did you get your first one and how integral has it been to what you do?
I couldn’t say for sure if i didn’t discover the MPC I wouldn’t be making music now but it’s a real possibility. The MPC60 has a certain sound and its feel and work-flow energises me and makes me happy to put the hours in. Also, the music I’ve released has caught peoples ear, either subconsciously or otherwise, in a way that I don’t think it would have if I’d made everything in Logic or Cubase. So I’d say the MPC60 has been completely integral to what I do.

I actually sold my original MPC60 a few years ago and decided to do everything in Logic. Worst move I ever made! I was depressed for months and realised I needed it back. I held out on eBay for a mint MPC60II and an MPC3000 and as soon as I wired them in it was fun again. I’ve been on them pretty much every day since.

VHS Dreams. Everyone who grew up in the 1980s remembers the excitement of renting films from the local video shop. For me it’s films like Star Wars and comedy horror films such as Critters, The Burbs and Gremlins. What are the films that are connected to your VHS memories?
Nice, top flicks!

Without wanting to sound like a Werther’s Original it really was an amazing time, everyone was on it and there were loads of random stores that suddenly had a VHS section in the back. The bulk of my VHS rentals were horror films like Friday 13th, Dawn of the Dead and Phantasm. I used to order uncut tapes from dealers in the USA. I remember the first movie I ever watched on a VHS cassette was Rocky, at a friends’s house on his dad’s brand new Ferguson Videostar. I also remember a friend had Alien on tape and we’d rewind and slo-mo and pause the chest bursting scene over and over till it pretty much wore out..

You’ve had several hats; record store owner, musician and record label owner. Which is the most challenging to wear?
I’d say record label manager is the most challenging of the three simply because it eats into my time making music and it’s a challenge balancing everything. You also have to motivate yourself and set deadlines to finish stuff as obviously there’s no-one else pushing you to do it.

That said, I’d rather deal with the extra work involved than be on another label. I have complete control over my music and how it’s released. It also means I get to release whatever I like and over the years have had the pleasure of putting out some amazing music by artists like Death of the Neighbourhood, The Witch and the Robot, Crowhead and Gripper. 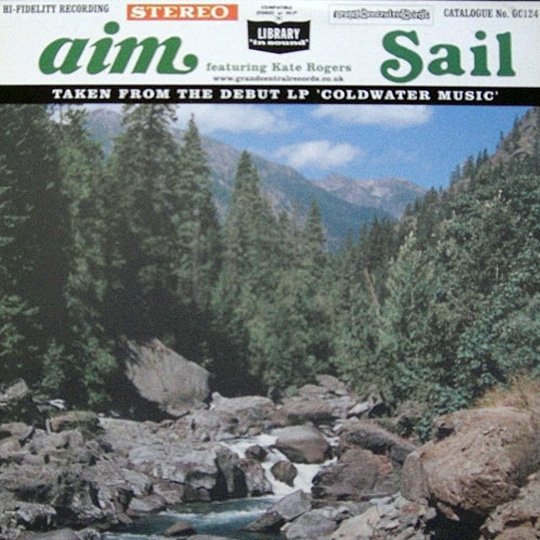 You grew up in Barrow-in-Furness and of course you are associated with Grand Central Records and the Manchester scene of that era. How would you say the North West culture and environment has shaped the way your musical process? I mean the titles of your first two records – Cold Water Music and Hinterland – plus title tracks are evocative of the Cumbrian outdoors.
Hard to say. I might be as a person but I don’t think my music is influenced by Northern culture and attitude. Musically I feel I’d have ended up making what I’m making now regardless of where I was raised culturally. There are far greater influences, like nature and fields, and records I grew up listening to and the fact that my dad was a jazz drummer who always had his own business and loved putting on shows.

I’m definitely influenced by my home town’s relatively isolated location and the way it has always juxtaposed industrial heaviness with glorious beaches and life-affirming sunsets.

When you were working in your record shop, what 12″ made you just stop what you were doing and marvel at what you were hearing?
That’s a tough one. Obvious hip-hop picks would be They Reminisce Over You by Pete Rock & C.L. Smooth and 93 ‘Til Infinity by Souls of Mischief. On a hardcore tip it would be something like Terra Incognita’s Alien Element (UK Mix) or Edge Records #1 Compounded.

If I had to pick one record though that blew me away when it first came in the shop and that perfectly sums up the vibe at the time it would have to be Dionne’s If You Want My Love (Big Club Mix). I loved this record and I’m still playing it now. Believe it or not, Barrow was where it was at for a few years back then. The scene was strong, well supported and cutting edge. My shop was opposite a club we used to run rammed nights in and to me this record sounds like the summer of ’92, late evening light, quality music and everyone on it.

Can you tell us a bit more about the QNC album and your plans for ATIC?
I’ve been working on my collaboration album with Q-Ball and Curt Cazal for the last three or four years. We’ve all put the effort in with this one, I see it as a proper statement release and from a production point of view it needs to be bigger and better than anything I’ve done so far. The tracks are there. QNC have recorded all their vocals and they sound incredible. Right now I’m working on the mixes and finalising the arrangements.

Releasing Drum Machines and VHS Dreams slowed things down a bit but as I hadn’t had anything out since 2006 and the label was kind of off-the-radar I thought it would help set up the QNC release if I could get my ‘Best Of’ album out first.

I have a DJ gig coming up in Belfast which I’m really looking forward to and I’m putting on free parties throughout the summer with a couple of old friends in Barrow’s beautiful town centre Park. We call it EXPO. We set the decks up in a Victorian bandstand which is surrounded by gorgeous gardens and grass verges and trees and when the sun shines and it’s warm and people are chatting and dancing and drifting off on picnic blankets it’s about as good as it gets. There’s no charge, everyone’s welcome, it’s vinyl only and we play until the sun sets.

And finally the mixtape for Bonafide Beats has been rescued from the vaults. If you could select one of the artists that appears on to collaborate with, who would it be?
Another tough one. I recorded this mix in 1993 and it has pretty much all my favourite hip-hop tracks up to that point. So Nas, Casual, Kool G Rap, I’d love to work with any of them.

If I had to pick one right now though I’d go for MC Eiht just because it would be something different and I’d be interested to see how it turned out. Streiht Up Menace is from the Menace To Society soundtrack and was a huge track for me back in the day. It has a resigned, nostalgic feel that lifts it above a lot of the regular gangsta stuff and it was a big influence on my music. I regularly try and rip off the string sample, synth bass and rimshot snare combo and it showed how hip-hop could get really deep and introspective but still sound fat. It also brings back great early nineties memories of when we used to meet up at a friends house on a Saturday night for a few beers and a smoke and we’d listen through the hip-hop albums we’d picked up that week before watching Yo MTV Raps.