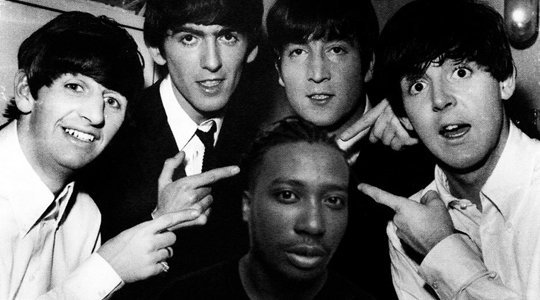 In early January we got wind of some unearthed music from The Beatles, material that would get people to re-appraise the relationship between the band and the Golden-era of hip-hip, and simultaneously blow minds, ears and speakers, and potentially get record label execs getting their lawyers on speed dial.

The Beatles, of course have form in this area. Their track Tomorrow Never Knows is a hugely innovative recording, using tape loops and different approaches to recording drums and flirted with the idea of sampling, whilst their unexpected collab with Danger Mouse on The Grey Album was characterised by a healthy tension from both parties in the name of artistic experimentation. However The Beatles & Friends An Adventure To Pepperland Through Rhyme and Space is a further evolution in the bands relationship with hip-hop.

The record is a series of recordings where The Beatles hook-up with the good, bad and ugly of hip-hop, including Nas, Public Enemy and Big Daddy Kane. The results sees I Am The Walrus reworked by ODB, Buckshot, Masta Ace and Special Ed into a thugged and drugged out Brooklyn Walrus, whilst Lucy In The Sky Of Diamonds gets turned into a street story by the GZA, and the aforementioned Tomorrow Never Knows gets the Busta Rhymes treatment.

The result is something, whilst available online, that we should enjoy and savour it for what it is – a great piece of sonic creativity.

Download The Beatles & Friends; An Adventure To Pepperland Through Rhyme and Space now

An explanation on how the recording came to light

The Beatles’ first visit to the United States of America is well documented: but what you can’t read in the history books is the incredible story of what really happened in the course of the transatlantic flight that took them there. Having departed Heathrow on the 7th February 1964, John Lennon, in a playful mood, ordered the pilot to divert the plane via the Bermuda Triangle. Newly declassified documents reveal that Pan Am Flight 101 disappeared from US radar screens shortly after midday, local time. At great expense we have obtained – from reliable Russian mafia sources – an MP3 copy of the black box recorder of that ill-fated Boeing 707. This indicates that as far as those aboard the plane knew, after experiencing severe cyclonic turbulence over the Atlantic Ocean, they re-routed towards New York, believing themselves to have narrowly avoided aeronautical disaster. But on arriving at JFK airport, they were stunned to learn that they had arrived in the year 1994.

The smooth English manners of the Beatles’ handlers managed to get them through customs without triggering a major incident and, after regrouping in an East Village hotel, the Fab Four adjusted to their temporally altered reality with typical vim and enthusiasm. As Pan Am suits fretted about the effect on their share price should this debacle ever become public knowledge, John, Paul, George and Ringo threw themselves – incognito, of course – into the vibrant New York music scene of the day. These four cheeky lads from Liverpool quickly won many friends in the booming world of hip-hop and, setting up a makeshift studio in Brooklyn (which they dubbed ‘Pepperland’ in tribute to the piquantly seasoned bagels from a deli down the block), they engaged these new friends in sprawling jam sessions. As weeks turned into months, Pan Am and EMI executives called in NASA boffins in an attempt to engineer a return to the swinging 60s. Meanwhile, in Manhattan society circles, rumours intensified about the true identity of the lovable English gentlemen rocking block parties in eccentric style, and they were forced to hide away in the studio where they continued to be visited by a steady flow of trusted MCs, filling tape after tape with history-collapsing musical alchemy. Eventually, an intervention by little-known amateur avionics enthusiast Big Daddy Kane enabled air traffic control to plot a route back to the rock ‘n’ roll era.

Having forged a deep connection with the people and the music that they’d encountered, John and George were keen to stay on in the 90s, but Brian Epstein refused to contemplate a breach of contract with the Ed Sullivan show, and Paul settled matters when he sided with the management. The Beatles got back to where they once belonged and, while they never spoke publically of their adventures in NYC’s golden age of hip-hop, the songs that they’d forged during their incredible burst of creativity there formed the backbone of their musical output over the rest of the 60s: albeit without the raucous hip-hop elements that had originally driven them. To the dismay of the many talented rappers and producers who had frequented Pepperland, government spooks ordered that all the tapes be destroyed to prevent them destabilizing the lucrative popular belief in the linearity of time and the segregation of musical genres.

However, with customary slight of hand, Biz Markie pulled an eleventh-hour switcheroo and it was Ringo’s collaboration with thrash metal stars Anthrax that was destroyed by the feds. Fearing retribution from some combination of EMI, the Illuminati, Def Jam and the FBI, Biz Markie kept the incendiary Pepperland recordings hidden from the world for nearly twenty years. When contacted by our investigation, Biz refused to confirm or deny the existence of the tapes, and offered no comment on the suggestion that a blunt shared with Kool Keith was the true genesis of the Beatles’ move towards psychedelia. Undeterred, we persuaded an intern – employed without pay to catalogue Mr Markie’s collection of vintage cereal boxes, rare action figures and hip-hop memorabilia – to smuggle the tapes out of the medium-security vault in which they had languished, having momentarily distracted her boss with a box of 1970s Fruity Pebbles and a mint condition Breakdance Barbie in its original packaging.

Motivated only by a belief that the listening world was now ready to witness the strength of Beatle knowledge, the selfless actions of this brave intern (current location unknown) have allowed us to make this timeless, priceless, epoch-shattering meta-posse cut mixtape available for the first time. Ladies and gentlemen, we proudly present: An Adventure To Pepperland Through Rhyme & Space.