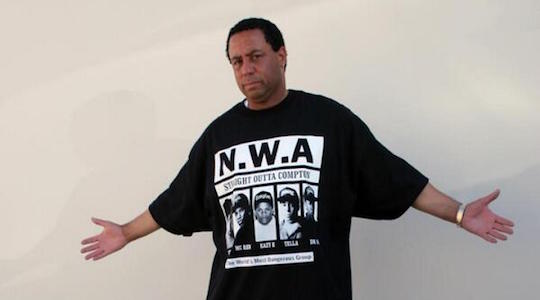 A comparatively quiet member of N.W.A, DJ Yella co-produced (with Dr Dre) both the debut N.W.A full-length Straight Outta Compton and its G-Funk infused follow-up, Niggaz4Life. The recent film paints him as a peacemaker, someone who wasn’t keen on beef or its consequences. Having helped oversee the making of the movie every step of the way, Yella has returned to his first love, DJing. He’s in the midst of a European tour, and will be opening up the Sankeys Warehouse Launch this Saturday at Victoria Warehouse in Manchester.

Now the dust has settled from Straight Outta Compton’s release, have you been happy with its response?
Oh yeah. Better than I thought. Actually, way better that I thought.

Has that been a surprise in terms of the mass media interest?
Yeah, definitely, because they hated us at first (laughs). Now they like us all of a sudden, it’s amazing. Then the movie caught on to so many new people, the younger generation – it’s opened up a whole new door. A brand new door for us.

Were you happy with the level of detail the movie imbued?
It’s close, as close as you can get for a movie about our story. It was shot well, produced well, everything. It looked way better than I thought it would. Wonderful, I was very satisfied. It brought our story to real life. You heard about it, might’ve seen some videos, but it brings our story – that’s the way we came up, that’s what we had to go through to get to where we are today.

You were a consultant on the film – were you happy with your level of involvement?
I was satisfied all the way around. I was on set, not every day because I had other stuff to do, but looking through edits, the three hour version, all kinda versions. But this version came out great, so I was satisfied, completely.

So there’s extra material knocking about?
Oh yeah, there’s extra scenes. I think there might be a three hour version (on DVD), because there’s so much extra footage.

Cube recently said that he felt that Eazy was teaching through the portrayal of him in the movie. The film reaffirmed N.W.A’s legacy, but have you heard much from new fans?
It’s so crazy that the new fans, the younger generation, is so overwhelmed by the movie. I guess there hasn’t been a movie like this in quite a while. I remember when I first seen a rap movie it was Wild Style, Beat Street and stuff like that. They was great movies back then. I guess the crowd knows a good story – it’s a great story, it’s not just a rap movie about five guys rapping, it’s a real story. It tells you about the business. It tells you about a lot of things – that movie covers a lot. It had laughter, it had sadness, it had happiness, it had fun in it. It wasn’t a typical rap movie at all. Universal wasn’t messing around with that. They put big money into it and it turned out well.

I imagine it may inspire young artists to ensure what they’re saying is relevant…
To me, I think it’s gonna be more of people making a movie like ours. There’ll be a bunch of rap movies, biopics in the next two years. Because that one, fortunately, got so successful, I mean, number one everywhere? And there’s still a few markets it hasn’t got to yet. Some people may speak more freely now, a lot of people are rapping about… whatever they rap about these days. We just rapped about what we knew. That’s what we really did. And we did what we wanted to do. And we didn’t let nothing change us. Nothing stopped us. So you know, hopefully music will change again, go back to the old school style. I hope (laughs).

Do you think it’s easier or harder for artists to make themselves known now?
I think it’s hard because there’s a whole bunch of competition, everybody’s a rapper. Everybody’s a singer. When we did it, there was very little competition. And, you think about it, all the groups from back then, everybody had their own style. Own sound, own style, own lyrics, whatever it was. Nowadays, there’s a lot of people sounding the same. It sounds like the same producer producing most of the tracks. Then the Kendricks, and certain people, break away from the crowd. Or the Drakes, The Game, a few people break away from the crowd. But a lot of the music sounds the same now.

You’re spending some time in the UK and Ireland right now. Is that rekindling any memories?
I’ve only been to London once! N.W.A only went to London one time. That’s the only place N.W.A went outside the country, was London. It was a different time back then, it was just a way different time.

“The people is like, we put Compton back on the map again.”

Your relationship with Dre has remained solid. How did you first meet?
We were both DJs when we first met. We’d DJ’d a while before we started doing music. We was in the (World Class) Wreckin’ Cru, but we was just DJing in the club. So it was just me and Dre and then we started doing the music, and the Wreckin’ Cru, then Eazy and Cube and all that came along, and N.W.A.

What do you think the key is to the longevity of your friendship and working relationship with him?
We was friends. Not before DJing, but we just, what you call bonded. It was just a click from the first time. Never had an argument, nothing. We was always on the same page. We just clicked, for 31 years, at least. Over 31 years!

What were those killer tunes for you back in the day?
When we was DJing it had to be the east coast stuff. Run DMCs, Kurtis Blows, LLs, all that kind of stuff when we were DJing. Once we started doing music, we didn’t DJ no more. We stopped DJing. We just produced, that was all.

Was the advent of the film your stimulus for jumping back behind the decks?
No, actually. It just popped in my head about two years ago. I had never, ever, even thought about DJing again. Never thought about it. And it just popped in my head, and it just started little by little, and now I won’t be home for two months or something. I’ve been gone for about a month already.

I’ve noticed you’re using a controller to DJ. How are you finding it?
I’m using a Pionner DDJ-SX2, and I just got me another one, the (DDJ-) SR, because it’s a little smaller and I don’t need four channels. It’s lighter to carry, you can’t travel with turntables and all that stuff no more. It’s just ridiculous now. That stuff is heavy. Fifty pounds per turntable, with a case!

(All the clubs) have CDJs. I’ve never used a CDJ. I like my controller because you got access to so many songs and it feels, it scratches like a turntable. The Pioneer is the closest to a turntable you can get. Think about it, the people that use the turntables ain’t using vinyl, they using the control records. With what I use, it’s got the cue points. That’s the key, to have your cue points in the record. You ain’t got to be pushing the letters on the laptop. It’s right there, it’s so simple, it’s amazing. Instant doubles, it’s really something. It makes it so simple, it sounds clean, especially the Pioneer got better sounding mixers. You don’t get no vibration, no scratch on the record, it’s just amazing.

Did that ever happen back in the day with N.W.A?
When we did tours, we had them floating a little bit so they wouldn’t vibrate. We were the first to ever perform off a DAT back then. Nobody even knew what it was. When our tour came out, the look on LL’s and them’s face, when our music came on compared to theirs… the next day they bought a DAT and put they music on the DAT player. You can cut it up louder, the turntables you never could because they eventually would vibrate. The turntables was great, but it’s old school. You’ve got to keep up with technology. Turntables look good, but it’s just a hassle now. Unless you’re battle DJing… and I never was a battle DJ. Think about it now, the battle DJs don’t even use real vinyl. I’ve seen one person – they almost won the contest, but it’s rare, vinyl.

What about production – are you considering going back to making music?
Well, dealing with the movie and hopefully, some kind of tour may jump off, that’s gonna be a long time in itself. I know Cube wants to get on the road, Dre is talking about the road now, so that’s gonna take up quite a few months if that happens.

So the N.W.A reunion tour is happening?
You never know. You could see something! Something’s gonna happen. I’d say it’s gonna happen right at the beginning of the year, or round there. This is the best time to do it.

How has the reaction been from Compton to the film, both on a street level and an ‘official’ level? How have people reacted to its portrayal in the film?
I guess, the people is happy, from Compton. The police is never gonna be happy. The people is like, we put Compton back on the map again. The south’s music, and east coast… Compton’s been lost for a while. Kendrick came and helped put it back on the map, but we refreshed the minds of people – this is Compton. It’s like it’s starting all over again, but it’s gonna be bigger that it was, way bigger, because it’s worldwide, instant and quick because of social media.