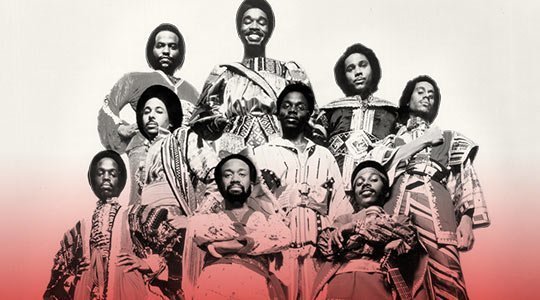 December 1977 in LA: Maurice White and his band take to the Inglewood Forum like emissaries from a distant planet. Hitting the stage with all the mystique, drama and aplomb of space-travelling aliens making first contact, they look elegant and ethereal; like something out of this world; the sequins lining their glamorous alien attire – their finely tailored vests, tank tops, and polyester shirts – twinkling like stars.

Child-like looks of awe flash happily across the faces of the expectant concertgoers intrigued by the night’s promise of dancing and spectacle. Their eyes fixed and focused on the stage, they look like UFO enthusiasts searching the skies for flying saucers.

White, and his bass-playing younger brother, Verdine; keyboardist Larry Dunn, and Phil Bailey the falsetto – along with the rest of the group – make their entrance; descending from the heavens in glass capsules wearing colourful dashikis, moon boots, and gold medallions that shine like pale orbs.

The funky musicians from outer-space light up the stage with a searing exhibition of grace and glamour, putting on a sizzling show so stylish it’s as though they’re cat-walking across the sun. This, a musical extravaganza of flying pyramids, laser lights and stunning choreography by George Faison, the closest thing to evidence of extraterrestrial life.

In spite of all the theatrics and pageantry, the space suits and pyrotechnics, nothing about this night – or any other night at the Fabulous Forum, for that matter – is quite as good and uncanny as the lighthearted melodies of Earth, Wind & Fire’s finest songs. The band’s arrangements and harmonies captivating all within earshot of the Lakers’ famous former home.

The Earth, Wind & Fire sound – like the band’s name – comprises of a few elements, melding jazz, gospel, funk, and R&B influences to make music magic. A joyful noise, theirs is the soul-infused sound of transcendence. A sound so uplifting it whisks the imagination off to some faraway elsewhere a million miles off anything anyone has ever heard – listening to a Maurice White composition on a night like this akin to attending a concert in the sky, or going to the opera on the moon.

And so, it is no great surprise that Earth, Wind & Fire – formed by the elder White in 1969 – continue to be a major source of inspiration for legions of artists and fans. Selling over 90 million records, gracing the Rock and Roll Hall of Fame, and boasting the poignant distinction of being the first African-American group to sell out Madison Square Garden, EWF make history the way they make music: hitting high note after high note.

Looking back on nights like these – nights at the Oakland Coliseum and the Greek Theatre; nights at the Forum – it is hard to believe Maurice White is no longer with us. Maurice, the showman, lithe and lively; bounding across the stage like a comet. Maurice, the tenor. The one with the receding hairline and inexplicably perfect afro. Maurice the brother. These are the gigs that bring family and legacies to mind, artists like Mr. White standing tall as patriarchs, having fathered so many musicians’ styles.

“Producers like Madlib losing themselves in Earth, Wind & Fire compositions like fashion designers in vintage outlets; always on the look for something worth repurposing – for something classic and timeless to flip”

Today, it’s easy to spot Earth, Wind & Fire’s hand-me-downs, with so many singers and songwriters fashioning themselves on the band and sounding like they’ve just ransacked the group’s dressing room. From Jill Scott to Erykah Badu, Lenny Kravitz to Wynton Marsalis; EWF’s presence can be felt – or better yet, heard – when listening to contemporary artists of damn near any and every genre. This being especially true of hip-hop’s greatest rappers and producers.

That EWF is still in vogue today speaks volumes for the band’s indelible impact on pop culture; the abiding popularity of the group owing much to rap’s fascination with the band. Taking cues from records like That’s the Way of the World and Getaway; Let’s Groove and Boogie Wonderland, hip-hop has been walking around in Maurice’s stylish shoes for decades, following in his band’s trailblazing footsteps.

Take MC Lyte’s Paper Thin. Produced by The King of Chill for the Brooklyn emcee’s debut album, Lyte as a Rock; the lively single is an empowering tour-de-force of lyricism and girl-power, pairing Lyte’s righteous rhymes with an indignantly fresh-to-death beat. Leaning into her microphone like a preacher might at a pulpit, Lyte gets busy and evangelical, her spirited bars raining fire and brimstone on the infidelities of a fictional lover.

Released to much fan fare and critical acclaim, Paper Thin took the charts and 1988 by storm; Lyte as a Rock launching the career of a hip-hop pioneer. Loud and funky with sharp bursts of emphatic horns, Paper Thin wears Lyte’s EWF influences on its sleeve, craftily sampling the band’s beloved 1975 hit, Shining Star, to create a resounding hip-hop classic. As Paper Thin demonstrates, time has made generous muses of Earth, Wind & Fire; the group’s extensive discography inspiring hundreds, if not thousands, of records.

Like Lyte and King of Chill, Main Source – the Canadian-American trio of Large Professor, Sir Scratch and K-Cut – owe some of the success of their stellar debut, Breaking Atoms, to Maurice White and his band. Atoms is marked by filtered basslines, jazzy loops and bright sunbursts of vintage soul; doffing its hat to the funk and majesty of EWF with the rowdy, uncompromising posse cut, Live at the BBQ.

Featuring Joe Fatale and Akinyele, BBQ brilliantly flips 1971’s The Man Tries Running His Usual Game.. – a smooth blaxploitation joint recorded by Melvin Van Peebles and EWF for the soundtrack to the former’s film – Sweet Sweetback’s Baadasssss Song. A raucous free-for-all of clever punchlines and hard hitting rhymes, BBQ is one of the most iconic records of its kind; it being the song that introduced the world to Nas.

“Hip-hop has been walking around in Maurice’s stylish shoes for decades, following in his band’s trailblazing footsteps”

Songs like BBQ call attention to just how impactful Earth, Wind & Fire are. They showcase the trendsetting band’s magical ability to turn rappers into tailors; inspiring artists like Main Source to outfit their repertoire and sound with all the accessories the brothers White threaded through their best work. Like Large Pro and co on Atoms, 1998’s Capital Punishment found Big Pun reaching for his thimble on the smooth-as-satin Still Not a Player; a sample of All ‘N All’s Brazilian Rhyme skilfully sewn into the beat of the Bronx rapper’s breakout hit.

With its alluring melody and sultry piano hook, Still Not a Player has all the seductive charm of a sexy slow-dance; Pun’s savvy emceeing flirting with the interpolated vocals of Brazilian Rhyme. Crooning its way to number 24 on the Billboard Hot 100, the single helped catapult the TS rapper to super-star status; Capital Punishment earning a Grammy nomination and a chapter in the history books – being the first rap album recorded by a Latino artist to go platinum.

As with Shining Star or The Man Tries Running His Usual Game…, Brazilian Rhyme is another of those timeless EWF songs sampled time and time again. One of those often referenced records that prove great minds loop alike; Eazy E, Tribe and Madlib all flipping the very same song.

Whether reworking classics like Power, Clover, or Open Our Eyes’ Feelin’ Blue, the great minds keep looping: Amanda Diva, Joey Bada$$ and Mac Miller just some of the latest rappers to flip a Maurice White composition. They, like Pun, try on the elegant tenor’s gear for size. They, like Lyte, embellish their music with all the accoutrements of classic Earth, Wind & Fire soul.

Custom-made for ingenious sampling, EWF productions just beg to be manipulated and scratched; to be looped and interpolated. Records like Sunshine, Fantasy and Keep Your Head to the Sky standing out to crate-digging DJs like a fresh pair of Jordans in a sneaker store.

There are few things more fitting or flattering to the craftsmanship of beatmaking than an EWF riff, vocal or hook. Producers like Madlib lose themselves in Earth, Wind & Fire compositions like fashion designers in vintage outlets; always on the look for something worth repurposing – for something classic and timeless to flip.

No fad or seasonal trend, sonic nods to EWF have become an essential part of music making for those rappers who hope to invoke the spirit Maurice White. To sound like they belong onstage in December 1977 lapping up encores at the Forum. An EWF sample being one of those versatile and reliable accessories producers like to keep in their drawers should a suitable occasion arise. One of those snazzy ensembles reserved for special nights. As Paper Thin, Player and BBQ attest, there is an element of comfort clothing to the best Earth, Wind & Fire songs; the band’s rousing horn sections and sophisticated arrangements providing feel-good material to slip into.

Eminently stylish, Maurice White and his groovy kalimba are a funky staple of hip-hop production; the tenor’s intricate compositions a dependable go-to for improvising producers and admiring fans.