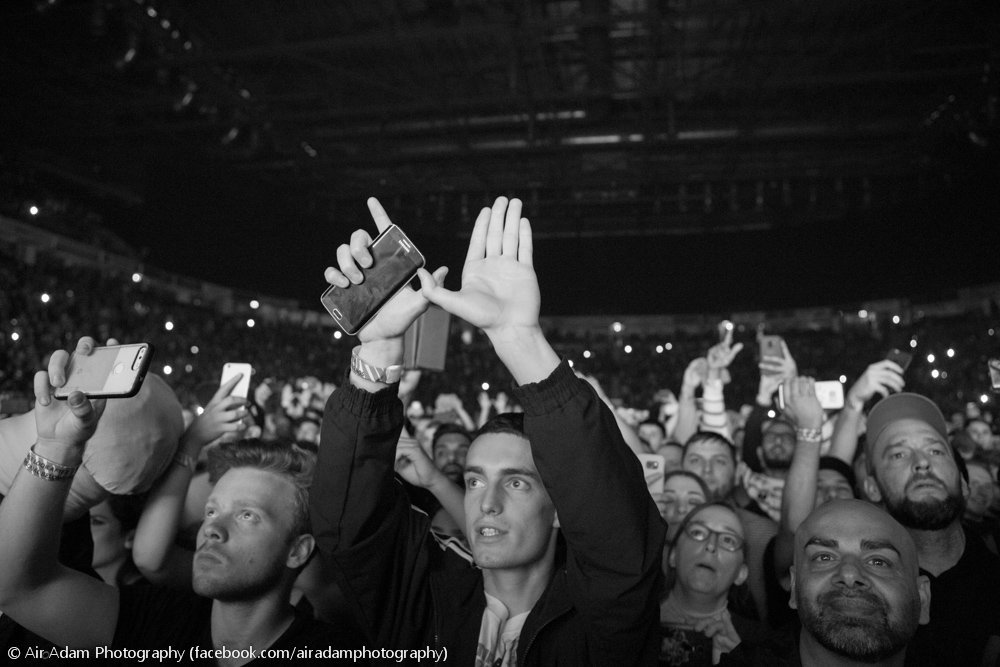 It had a line up so unbelievable that there were rumours it was fake when the poster was first revealed. So expectations were high for the first Gods Of Rap tour dates.

Conceptualised by gig giants SJM Concerts and the first tour of its kind in terms of uniting heavyweights at an arena level, the timing worked out perfectly for three crews synonymous with classic hip hop – De La Soul (30 years of 3 Feet High and Rising), Public Enemy (30 years of It Takes A Nation Of Millions To Hold Us Back) and the Wu Tang Clan (25 years since their debut long player, Enter The Wu Tang – 36 Chambers).

At Manchester Arena (May 11th) DJ Premier is our constant throughout the evening, representing Gang Starr, who in another world would be on the bill too (it’s also 30 years since their debut, No More Nice Guy). Guru’s presence is felt largely throughout the night with RIPs for him from all acts. Preemo’s the party starter, hosting and warming up for each artist with his familiar, Stepsil-inducing shouty instructions to the crowd while dropping classics left, right and centre. 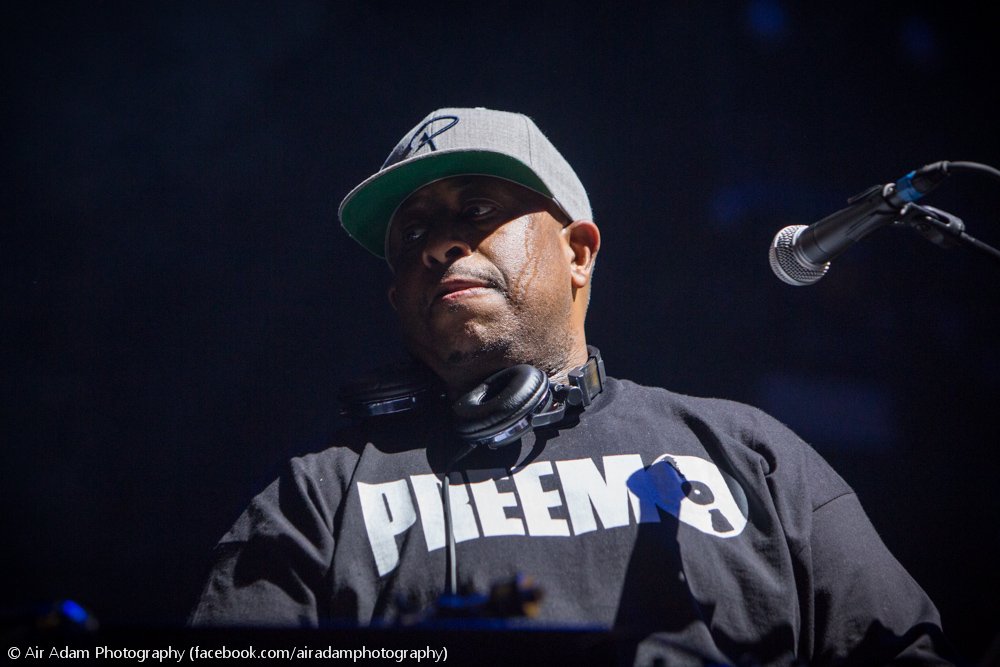 There for Gang Starr: Preemo

Act 1: Maseo takes to the decks with a call and response to the crowd of ‘Preeee-mo’ to thank our host, then intros De La Soul to rapturous applause, with seemingly a larger percentage of the audience ready for the early start than in London the previous night (although plenty don’t arrive in time). 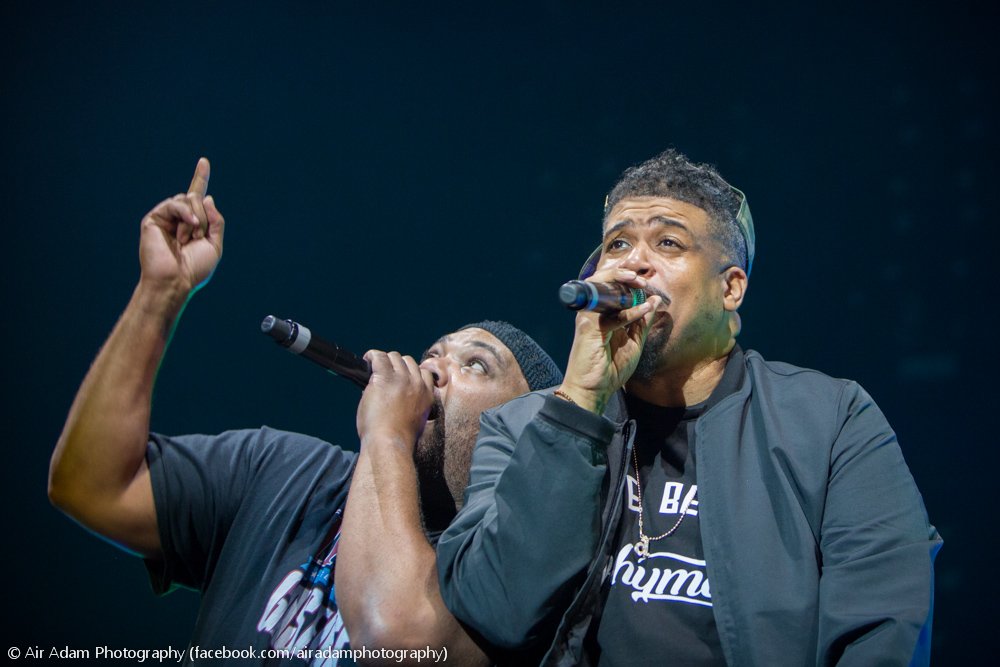 The trio are on form, Trugoy and Pos emerging from the shadows to the snap of The Return of DST. Grind Date is only the second song in but already Trugoy is having his vibe quashed a little, and launches into a tirade at the photographers and security in the pit to get their hips wobbling. Good vibes return and second gear is entered once Maseo drops latter De classic Oooh, and joins his fellow Plugs to stomp the stage, picking up the pace. 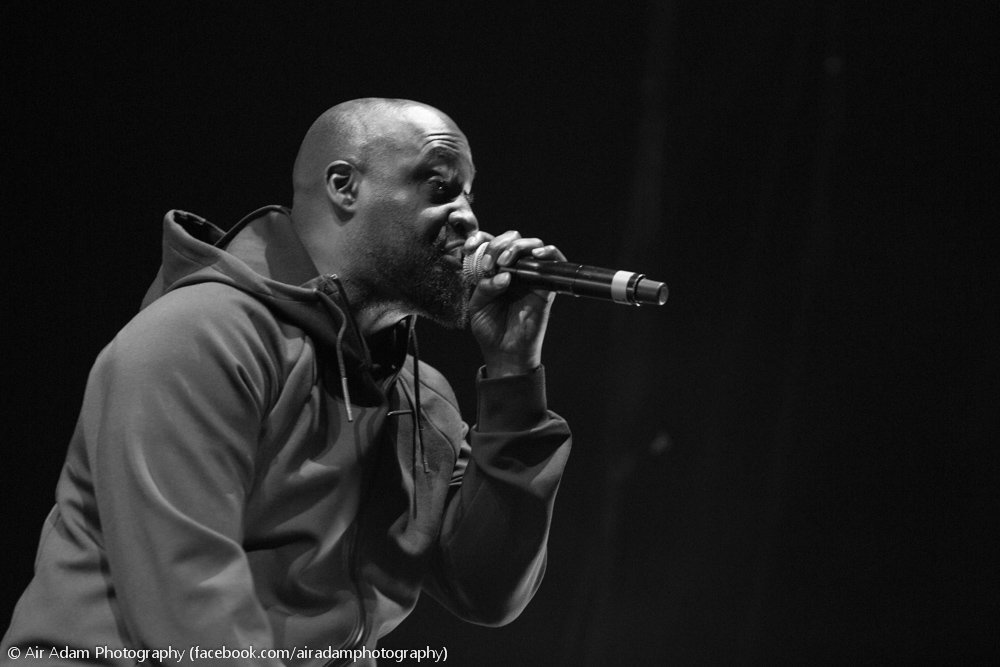 Just as the disparity between the Daisy Age visuals and post Daisy Age tracks starts to get the audience wondering if they wouldn’t be getting any anniversary drops, Trugoy sends thanks to fans for the opportunity to take it back before doing so to ’91 for A Rollerskating Jam Named Saturdays, then ’89 for Me Myself and I before ending with live staple Rock Co.Kane Flow (the loudest in an already loud set – yes, some of us have hearing sensitive enough to remember some of these albums coming out), complete with robot freezing and Pos (relatively quiet on the mic over their session) taking a lie down on the floor. 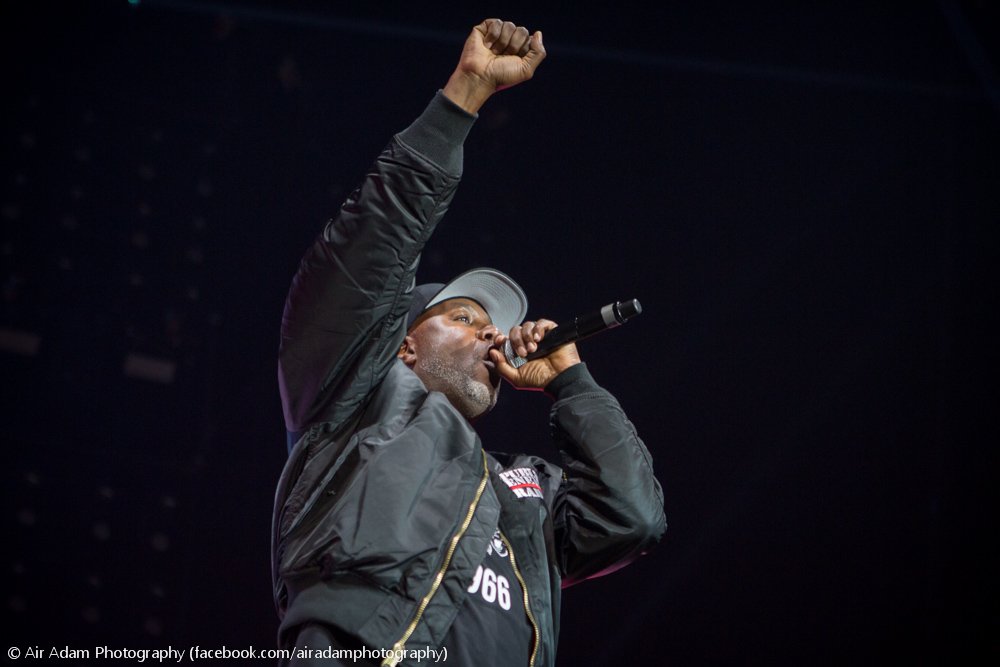 After another winning Preemo interlude (he’s still having a great time, and so are the punters, following orders and getting down like a hip hop aereobics class), Public Enemy Radio hit the stage. A little confusion washes over the audience as PE 2.0’s Jahi opens proceedings with DJ Lord, who’s been with PE since 1999, but once Chuck D strides on it’s all systems go for the arena, and the agenda of Public Enemy Radio becomes clear – a live mixtape performed by ‘a stealth auxiliary unit’ dedicated to the elements of hip hop. In terms of energy levels and hyped delivery there’s of course plenty going on without Flavor Flav (who’s opted out of touring or working with PE recently) and Jahi is an excellent and passionate counterpoint to Chuck, but his sheer distinctiveness means there’s still a Flav-shaped hole and distinct lack of clock necklaces. Shouts must go to the Security of the First World dancers also, relentless in their routine and fleshing out the experience as always. 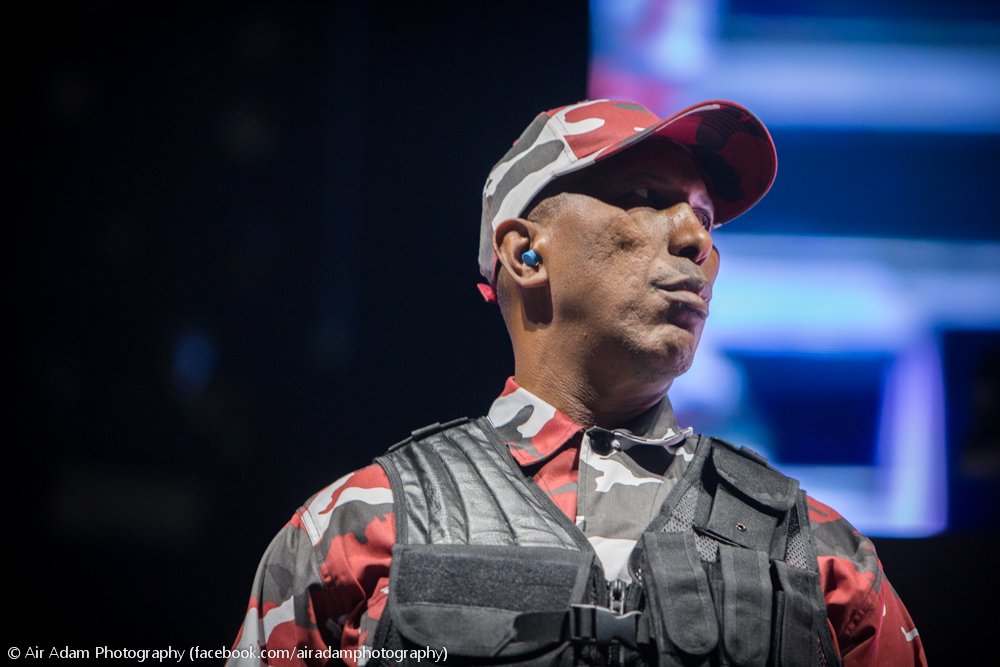 Amongst the hard-hitting, shortened versions of well-known PE tracks there are plenty of rallying calls, a dis on Theresa May and cries of ‘Fuck Brexit, and fuck war‘ from Chuck. Fight The Power sees him replace the ‘1989‘ intro lyric with ‘2019′, because the more things change the more they stay the same, and there’s more outlining of the elements before a feel-good finale of Harder Than You Think. It’s time for the crowd photo, a custom they were taught by Cypress Hill’s B-Real – possible contenders for future Gods Of Rap shows. 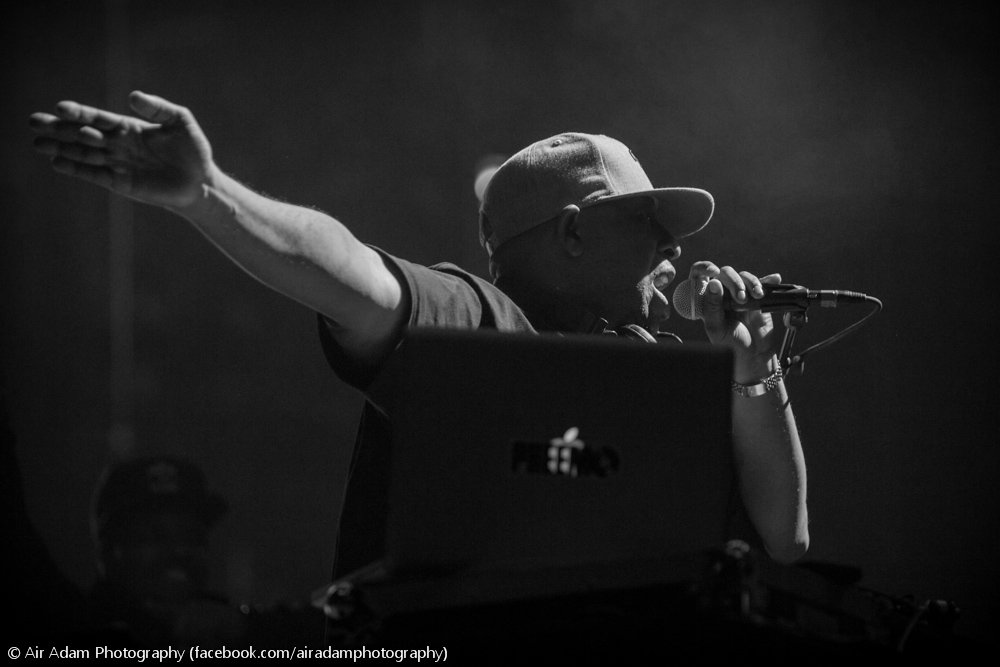 Preemo’s final set sees him pay tribute to Big L with more call and response, plenty of Gang Starr, Nas‘ The World Is Yours, in particular, setting the crowd off as we’re minutes away from the Wu – ‘you may have heard this one on television!’ yells Preemo, before a Fresh Prince of Bel-Air rap-a-long disperses some of the NY street cred many of the crowd have gained through osmosis.

The arena washes blue, then black, and the crowd chant Wu as one. Wu Tang Forever’s intro track comes on to provide backing for a monologue from RZA as he steps on stage emblazoned in white, and silhouettes gather muttering, ‘Turn me up, turn me up,’ over the various mics in the dark. Slam, we’re into Bring The Ruckus and the crowd goes wild after several hours of anticipation. Longtime ally, producer, DJ and originator of the W logo Allah Mathematics is on deck and the crew – complete except for Method Man and with Old Dirty’s firstborn son Young Dirty Bastard rapping his father’s verses – race through the vast majority of 36 Chambers. The backing tracks have never sounded so good, and may have seen some remastering for the anniversary as the drums really smack over the arena sound system, now at a powerfully solid level after peaking too sharply for De La. 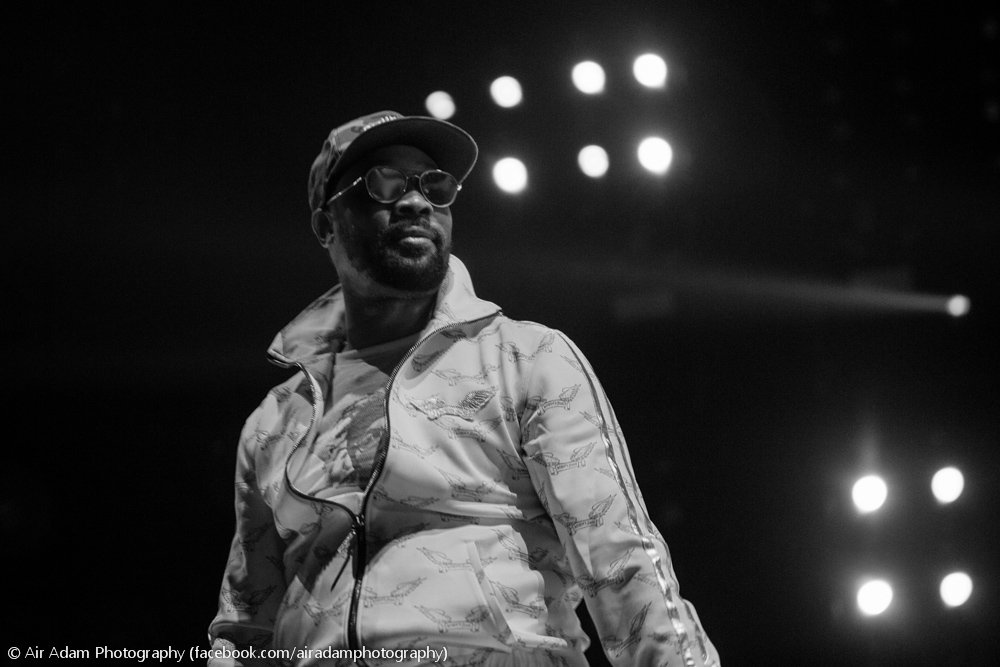 25 years deep into his de facto leadership role, RZA conducts the Wu masterfully throughout the set and empties at least three bottles of something fizzy over security and the front row. The Wu take turns to energise (Cappodonna is particularly on form following his introduction from RZA, restating his official position as tenth Wu Tang member), reminding the audience they can only give as much energy as they receive. YDB plays the role of his father as just that, the elders looking on as he dives into the crowd for Shimmy Shimmy Ya and Got Your Money (after the gig, he’s out of backstage and on the arena floor wild-eyed with fans chasing him to sign caps).

A badly received but well-intentioned point comes with RZA likening Manchester to Liverpool and diving into The Beatles’ Come Together, giving him poise to launch into full rockstar mode, but most of the crew seem a little uneasy and stationary save for a little arm waving, putting me in mind of when Raekwon went on strike during the making of A Better Tomorrow. 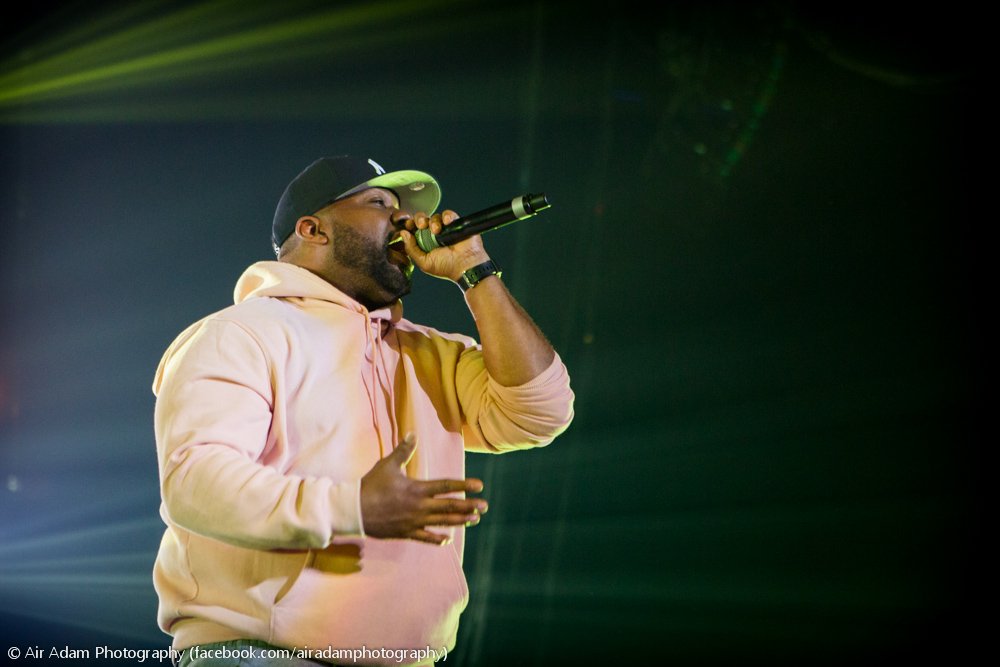 They pull it back with Triumph, always a great marching posse cut – it ends in laughs with Ghost finding himself running out of words and finishing his verse with shouting ‘la la la la la’ at Rae, cracking him up enough for Maths to kill the music. Rae picks up the lyric again and RZA pops another champers bottle off to cap the track – by the time Gravel Pit finishes off the set everyone’s a little tired and most of the Wu are entering standby mode. 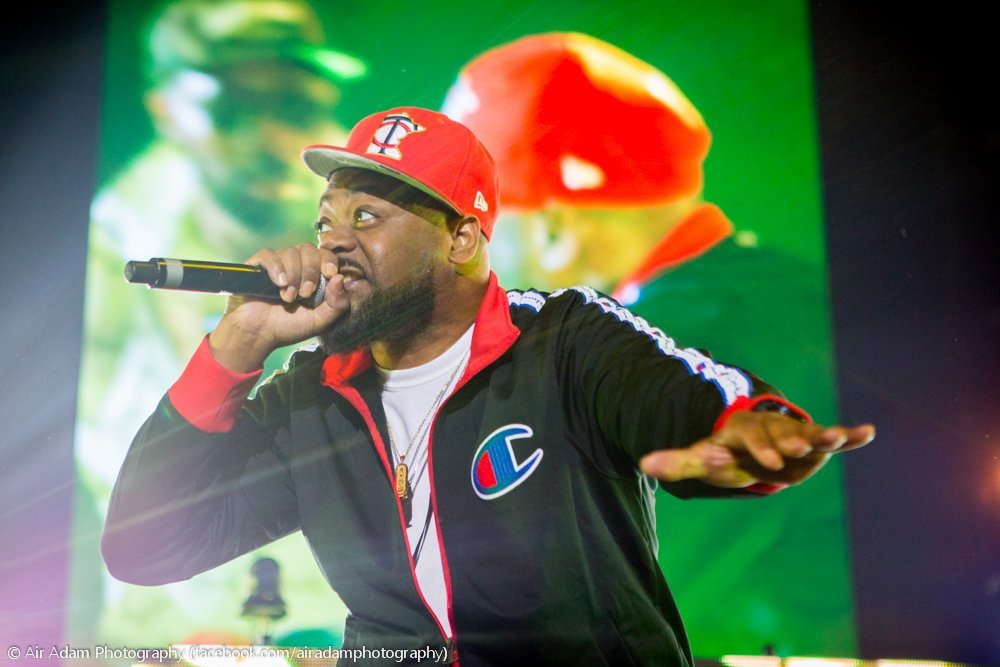 One of the most prominent on the night: Ghostface Killah

The majority of the Clan exit while a couple hang back – U-God throws in another verse to seize the spotlight, and RZA jumps on the decks to spin a couple of tunes as people make their way out, wondering if this may be the post-credits sequence.

SJM are onto a winning formula with Gods Of Rap, the umbrella title negating the reliance on any particular act meaning a sequel is incoming, maybe sooner than you think. A triumph for all involved. 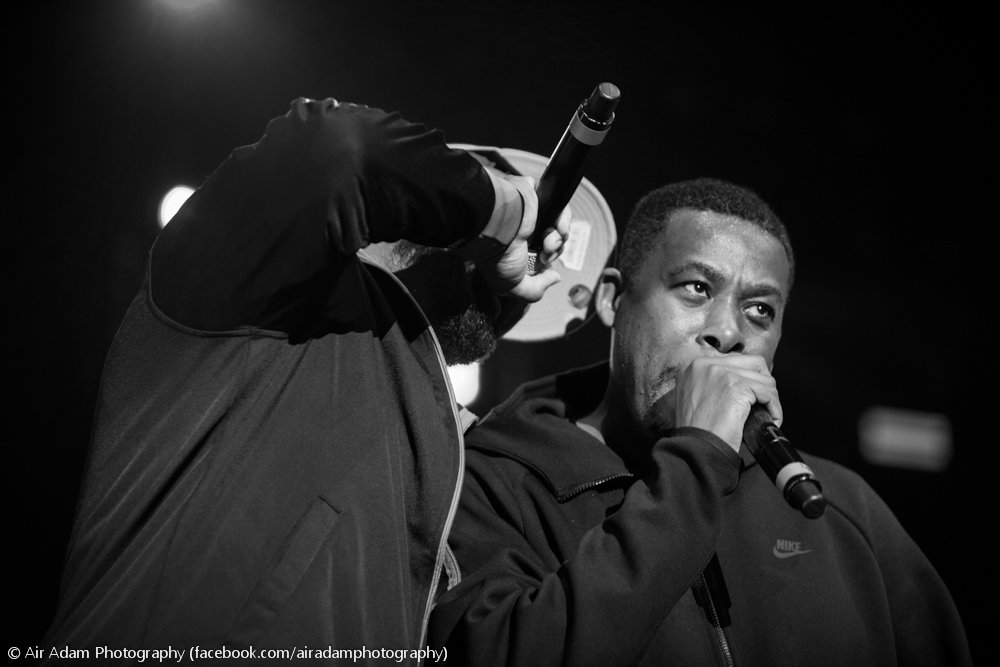 A quarter-century deep: Ghost and GZA