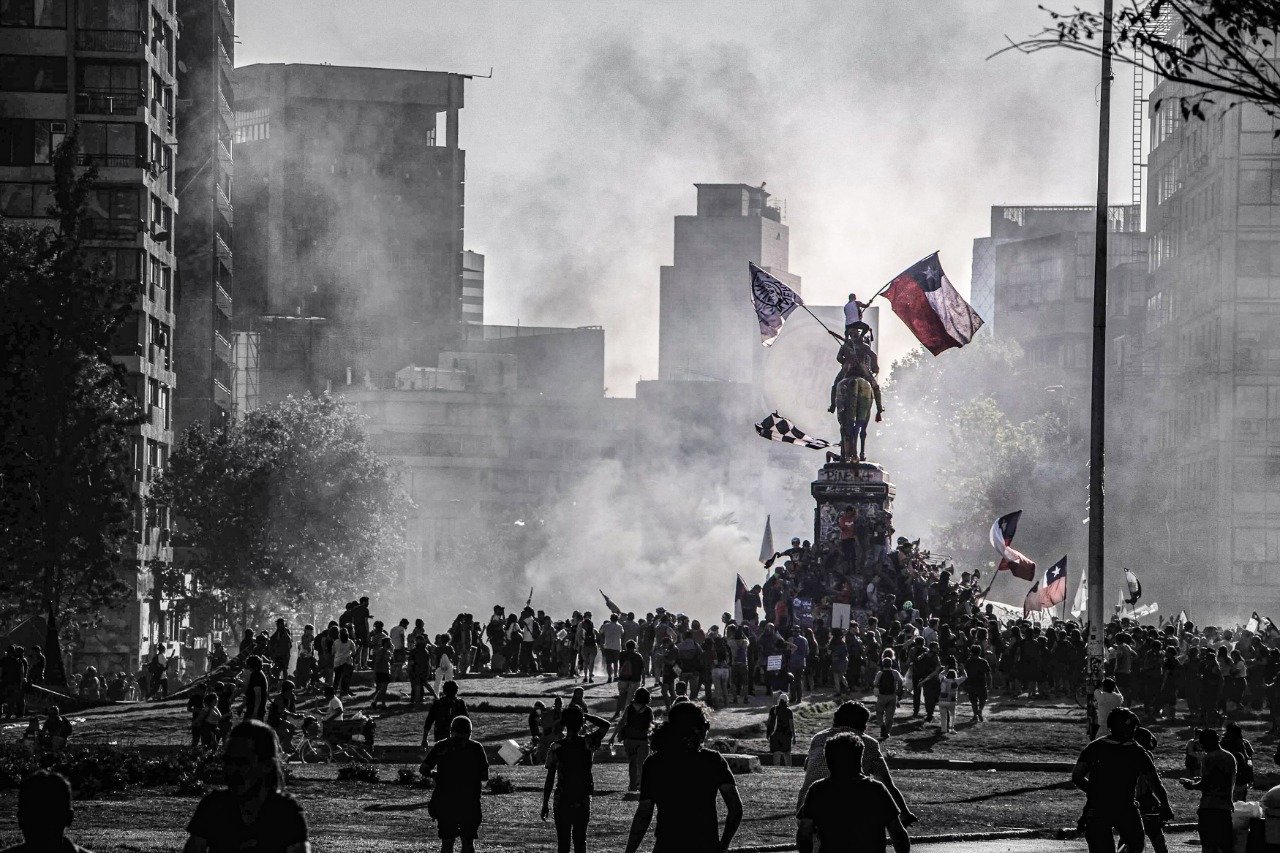 Santiago Rising is a new documentary from director Nick MacWilliam and Alborada Films, charting the massive demonstrations and protests which began in 2019 in Chile’s capital and spread through other areas of the Latin American country.

Filmed during the weeks after protests began, Santiago Rising meets social movements, protesters and ordinary people in their struggle for equality and human rights and emphasises the prominent role of music and art in political dissent.

Chile had a history of music as social protest even before the violent and deadly takeover of the country by General Pinochet in 1973, la nueva canción chilena – the ‘Chilean new song’ movement, folk music with a focus on positive social change – soundtracking the working class call for change since the 1960s.

Since 2019, certain tracks have echoed in the streets – on the eve of showings of the film across the country, Nick provides an insight into some of these below.

When I shot Santiago Rising on the streets of the Chilean capital, not only did I want to capture the immense uprising engulfing the country – widely known as the ‘Estallido Social’, or the Social Explosion – but also the incredible creative outpouring with which Chileans were expressing their vision for a fairer society, as well as their rejection of a political-economic model founded on the atrocities of the Pinochet dictatorship.

I lived in the country between 2010 and 2014 and saw how important cultural expression is to grassroots social mobilisation. I regularly attended protests for indigenous rights, free education, environmental protection or justice for Pinochet’s victims, where music and street art were always prominent in amplifying political messages.

In late 2019, back for the first time in just over five years, I knew the Social Explosion would be unfurling to a soundtrack of samba, hip-hop, ska, cumbia and, of course, la nueva canción chilena, or the Chilean new song, the socially-conscious folk music that has roots in Andean tradition as well as in the revolutionary impulses of 1960s Latin America. I wanted to document the story of the Social Explosion through the voices of those on its frontline. Often, these voices were making themselves heard through music.

On one side, the heavily militarised police were indiscriminately targeting protesters and passers-by with tear gas and water cannons. On the other, the people’s chosen weapons were trumpets and drums, or bicycles, or superhero outfits. For me, this stark contrast underlined the economic model’s dependence on violence for its survival – just as it had done for its creation through Pinochet’s state terror – and the inspiring resolve with which the Chilean people were tearing down the dictatorship’s lasting legacy.

With this in mind, here is a personal selection of songs to reflect Chile’s Social Explosion and the radical traditions of Chilean protest music.

The iconic folk musician Victor Jara addressed state violence, international solidarity and class consciousness through song. For this, he was murdered by Pinochet’s thugs in the days following the 1973 military coup.

While Jara’s El Derecho de Vivir en Paz (The Right to Live in Peace) is the undisputed anthem of Chile’s Social Explosion, I’ve chosen here Angelita Huenuman, about an old Mapuche woman Jara knew in southern Chile. The song is typical of la nueva canción’s determination to herald the most oppressed members of society, a trait replicated in the Social Explosion.

This political hip-hop classic lambasts the brutal inequality forced on the Chilean people through the military dictatorship.

Portavoz dissects the daily realities of life under crushing neoliberalism, while taking aim at the false image of regional stability cultivated by Chilean elites in international media.

Another one of Chile’s socially-conscious hip hop groups, I interviewed Adickta Sinfonia at a community gig in the Villa Francia, ‘one of Santiago’s emblematic neighbourhoods of solidarity and resistance’ as I called it in the film.

These groups are using hip-hop to disseminate visions of a fairer society to young Chileans, in the same vein as la nueva canción did for previous generations.

Possibly my favourite section of the film is hip-hop superstar Ana Tijoux’s performance at the same Villa Francia gig, where she shares the mic with a young girl in the front row who reels of the anti-patriarchal lyrics to this tune.

As Tijoux takes back the mic, the girl bounces with happiness and her older companion, possibly her mum, screams with excitement. It’s a lovely moment of shared emotion – and one with a political message.

Alongside Victor Jara, Violeta Parra is one of Chile’s – and Latin America’s – most influential radical musicians. More than half a century after her death, her legacy continues to resonate throughout Chilean protest music.

La Carta (The Letter) recounts the arrest of the protagonist’s brother for supporting a workers’ strike, as ‘in my homeland there is no justice.’

This song closes the film. As soon as I heard it on the streets, I knew it was the tune to bring the curtain down. Immensely singalongable, its fierce energy rips into police brutality while also mocking them through the timeless street slogan ‘el que no baila es paco’ – anyone who doesn’t dance (or jump) is a cop.

Massed ranks of exuberant Chilean youth kept chanting it even as they were being drenched with water cannon.

Living in Chile, I must have seen these guys live at least ten times and never found it boring or repetitive. They fuse Andean folklore and cumbia with a punk energy, while delving into Balkan and Middle Eastern influence. It never fails to send the crowd wild so I was delighted to film them playing in the protest epicentre, Santiago’s Plaza de la Dignidad, on New Year’s Eve.

Meta Cumbia – Ya Van a Ver

Another anthem of Chile’s Social Explosion, the rousing melodies underpin a core promise of rebellion: ‘the bullets you fired at us will be returned’. It was being sung all over the place.

The song doesn’t appear in the film but I enjoy its sentiment. We are the millions, while they ‘governed the past…  but they will not govern the future’. Plus it’s a great folky pop tune and Camila was among the many musicians turning up at protests to invigorate crowds with their music.

Venezuelan singer Soledad Bravo covers Cuban troubadour Silvio Rodriguez’s song about love and repression in the Chilean capital. With the Andes towering above an embedded culture of resistance and creativity, it is a city close to my heart and one I hope to return to soon.