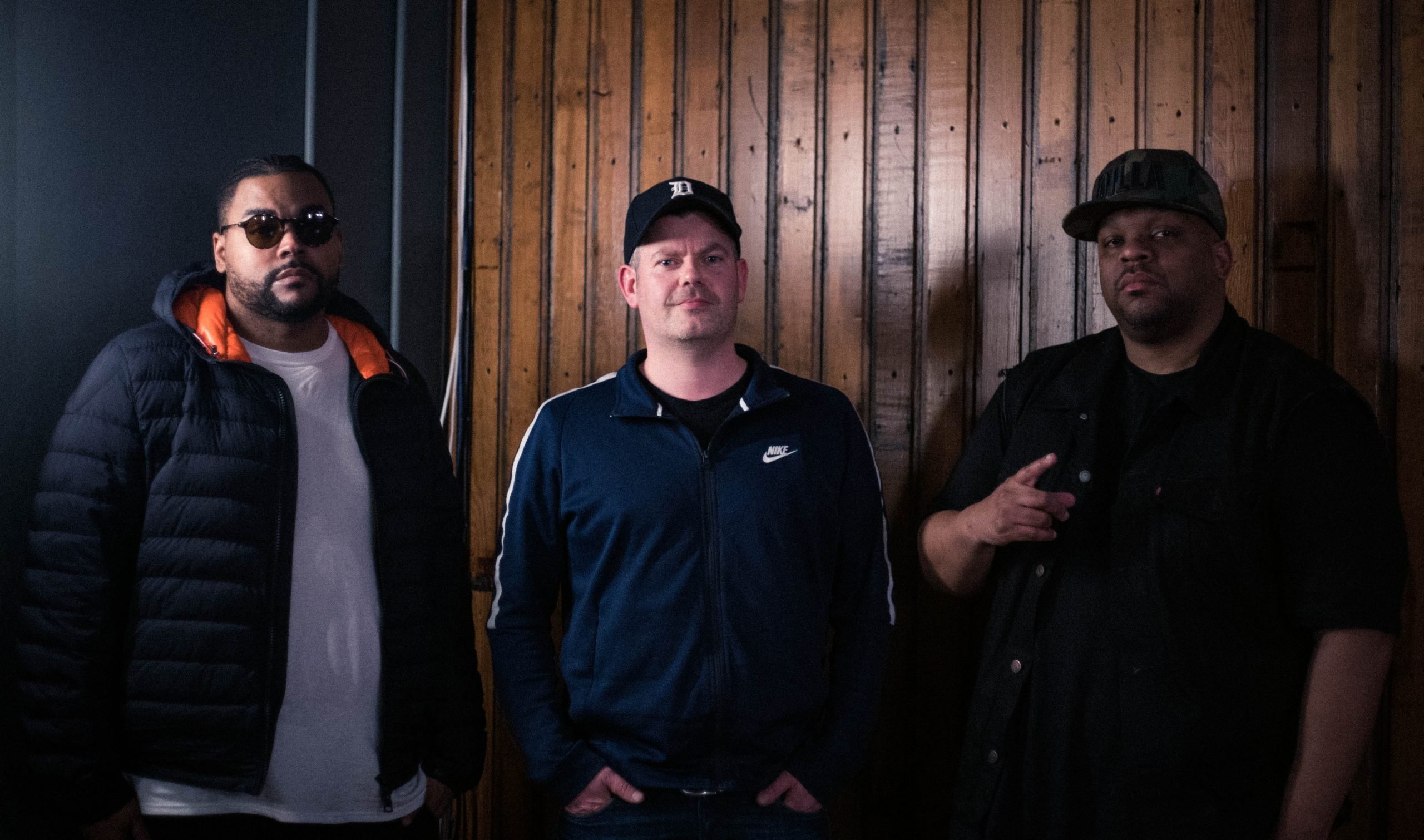 T3 and Young RJ are Slum Village, and the crowd is in the palms of their hands. Steeped in the legacy of the legendary and sorely-missed producer Jay Dee, latterly known as J Dilla, their stage show this evening is unashamedly a tribute to their lost brother (it is Dilla month, after all), both in their lyricism and the music new collaborators Abstract Orchestra play to back them. Having performed their own individual sets and with a curfew rapidly approaching, the culmination of the sold-out gig sees the Detroit producer/rappers backed by the orchestra to perform short, sharp snaps of Slum and Dilla tracks such as Fuck The Police (his 2001 solo debut single after leaving SV). The packed out crowd, mostly a sea of young faces dotted with some more seasoned but all united in sweat, rap along intently.

Far from being a very different incarnation of the ‘classic’ SV, as has been a misconception from people who don’t follow their work closely, the individuals on stage right now are integral to the name. T3, of course, has been there from the beginning, forming the group with Jay Dee and Baatin as teenagers, and is the only surviving original member. Young RJ was formerly an unofficial member of the group, having worked on Climax (from 2000’s Fantastic Volume II) with Dilla after being taught to program and mix by him. In 2012, the current incarnation of SV was created as RJ and T3 solidified their current phase with Evolution in 2013, and Yes! in 2015.

Leeds-based Abstract Orchestra (made up of seasoned session musicians who’ve played with the likes of Amy Winehouse, Jamiroquai, Corrine Bailey-Rae and Submotion Orchestra) have released two albums and a single on ATA Records, following well-received live performances – the first was simply entitled Dilla, rearranging his production for a big band/orchestra, inspired by Miguel Atwood-Ferguson’s acclaimed Suite For Ma Dukes, performed in Los Angeles in 2009. This was followed by New Day, a single with Dilla’s little brother and former Slum member Illa J, before follow up album Madvillainy Vol 1 earned them even more recognition. Tonight is the fourth date they’ve done with Slum Village. Bonafide sits down with Abstract’s band leader, Rob Mitchell, a beaming T3 and a more reserved Young RJ minutes after leaving the stage. Working with Slum after paying tribute to them must feel like coming full circle for Mitchell, and a fairly nerve-racking experience to boot?

People cut out, some people die, we talking about a 20 year span of music. A lot of things can happen in 20 years – T3

“Yeah, man! I’ve definitely had to pinch myself these last few weeks. When Abstract started off we were doing Slum Village covers, Dilla covers, Tribe Called Quest, and a mix of other stuff, but all Dilla influenced, really.”

“I heard of Abstract ‘cos they did something with Illa, it was my man, so of course. I was talking with Illa and saying it was dope,” T3 recalls, his thick Detroit accent a mellow contrast to Mitchell’s warm Edinburgh lilt. Playing with a live band must freshen things up a bit? “It’s always dope. We used to have a band, a long time ago, a five piece, nothing like the orchestra.”

Mitchell’s been around the block when it comes to performance, having studied saxophone since the age of 15 in New York, where he discovered a love of big bands under drummer Justin DiCioccio. Hearing Miguel Atwood-Ferguson angle Dilla’s music with chamber music arrangements was a game changer. “The first time I saw (Suite For Ma Dukes) on YouTube it blew my mind. That was definitely a massive influence, for sure, in terms of… not necessarily replicating it, but doing something as my own interpretation of it.”

“How’d you put it together?” asks T3. The tour’s been so hectic in terms of squeezing in rehearsal time, the two crews have had little time to kick back, chill and explore each others’ worlds.

“Well, my background is more big band music, so it was really natural for me to piece the two together. I grew up loving hip hop, and it wasn’t until I saw that video with Miguel, I thought, ‘Shit, right, okay, this is what you can do…’”

“It’s dope man, I wanna do more stuff with (Abstract), we talking about doing records together and other stuff too. We gonna see what the future holds.” 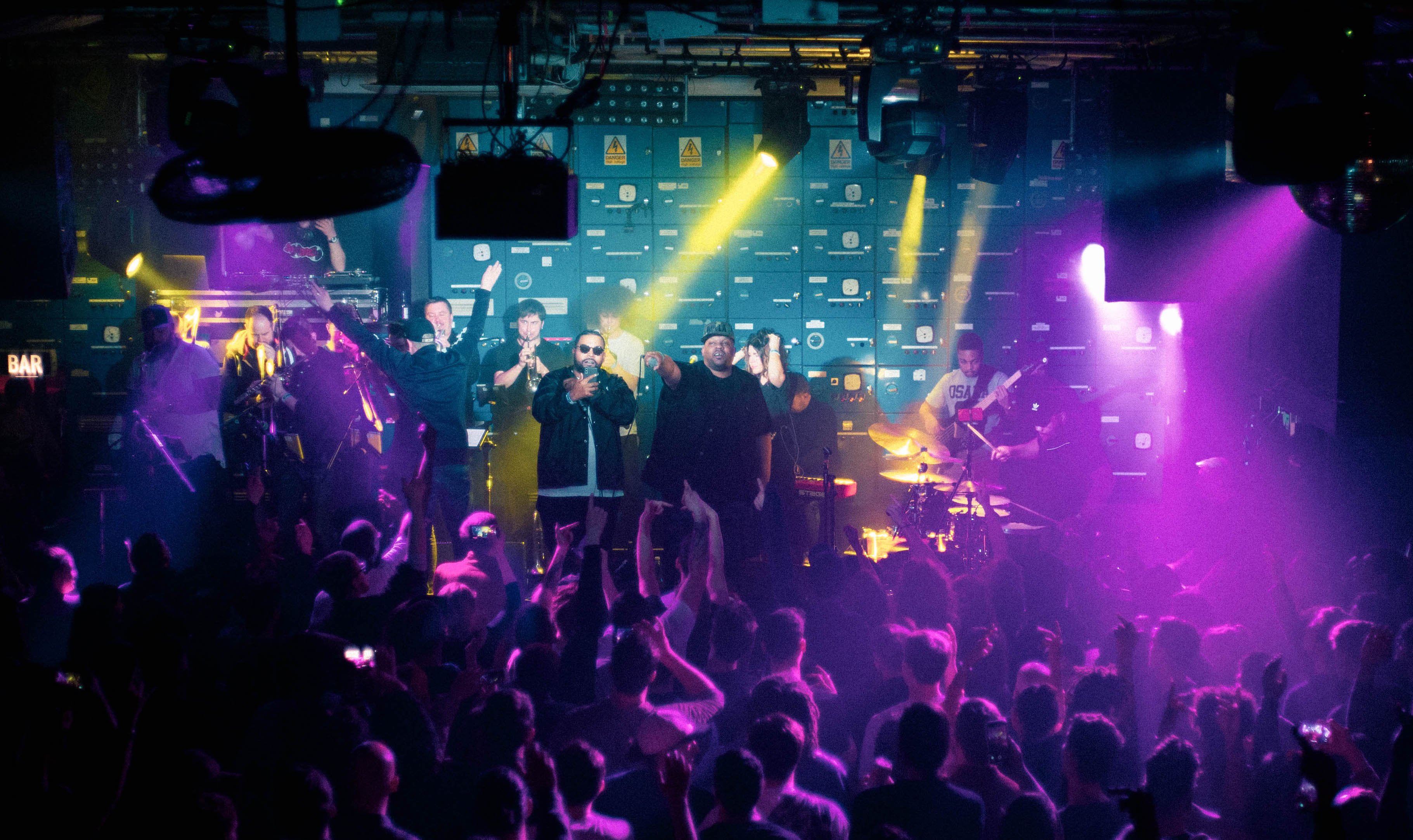 Even though this is something new for Slum, it’s very much linked to their foundation. Do they worry about maintaining a balance between that and striving forward with new material? T3 shakes his head, smiling. “We been past that threshold a long time ago, it used to be like that, but we surpassed that many years ago. When we did, it just took some grindin’.

“See, here’s the thing about Slum Village, this is what people don’t know. If you look into the audience today, they’re not old people. They’re not people my age. They’re young folks, which means it’s a whole ‘nother generation that like Slum Village. All those standards that old people woulda had, nit picking, that’s all gone because they’re not there anyway. We’ve been going at it so strong that we’ve developed a whole younger fanbase with the same music. And some new stuff as well. So we don’t have to work at that.

“You know, for me, the worst fan is the fan with too much information, let me just throw that out there. Old heads are like, ‘I remember when you first came out, when you was 17, you did this, and this’… those are the worst fans!” he laughs. “I love ‘em, but they don’t continue to support because what happens is, me as a musician, I understand that groups have situations. Any old group you look at, The Temptations, different types of music, people don’t last. People cut out, some people die, we talking about a 20 year span of music. A lot of things can happen in 20 years.”

Young RJ has been tasked with bringing some of Dilla’s unfinished beats to life for certain projects, both Slum’s work and solo Dilla releases. In the same way a paint conservationist is tasked with restoring paintings and filling in the gaps, RJ has added to beats Dilla left behind. “This is all stuff that he prepped us to do. Almost like he already knew he was gonna pass. Or, he had a certain amount of time here. He instilled in certain people things that he wanted them to know to be able to carry on the legacy. And the same thing when it came to Baatin, so this is all stuff they already prepared me and ‘3 for.”

“Yeah, we actually had the conversation,” adds T3. “He (Dilla) taught me how to make beats, he taught J a bunch of stuff, he was there when we did (2004 single) Selfish even though he’s not even on that record. We supported each other in different ways. He just wanted to do his own thing, but he wanted the legacy of Slum Village to be always go on.”

RJ was indeed young (“14, 15…” he recalls) when Dilla asked him to collab on finishing Climax and mix down tracks for Volume II. At what point did he realise the impact that Slum was having, the weight of its legacy? “I don’t necessarily feel no weight, ‘cos it’s like being around your family. When you take a higher position in the family, it’s not like you say, ‘Oh, I feel more responsibility’. It’s kinda like everybody is training, and grooming this person to take on some more responsibility along the way. Like you said, it started with Volume II, mixing some of the songs…”

RJ seems to have been close to Dilla’s mother Maureen Yancey, famously known as Ma Dukes or Miss Yancey, for a long time. “Since I was a kid. Been with Slum Village since 1992.” Hence the trust with safeguarding Dilla’s beats, then. “Yeah, it’s not even like that. It’s more than just… people talkin’ about, we family – we actually are family. We argue like a family, we put it back together like a family and we support each other. By any means necessary. I think that’s just the main thing of the Slum Village legacy, period, which is supporting that family of Slum Village. It helps and takes care of so many people. Miss Yancey included.

“All you can do is just do the best you can to steer the legacy in the right direction that you see is fit,” he continues. “That’s what me and 3 do our best to do, which is not going out there prostitutin’ on a bunch of shit just to say we got something out. If we gonna do some music, it’s gonna be because we feel like doing music. We at a place creatively that it makes sense, and that’s something that we want to do. It’s like that with everything, music, movies, or comic books, shoes, whatever else. We gonna move everything forward and try to keep stirring this legacy.”

Sounds like interesting happenings in the pipeline. “All that, thinking about some comic books,” smiles T3. “We got a couple of things that’s in the works, I can’t say too much… we gonna switch it up a little bit, little music here, little this, little that… I’m just happy to be working 20 years later, ‘cos a lot of people can’t work 20 years later. That’s a blessing. But, it was hard work, because when I kept Slum Village going I had so many haters, and most of the haters were from my home town. Which sucks even more. You would think they would encourage me more. Mm-mm. Those were the biggest haters!”

Surely that’s jealousy over anything else? “I guess, I guess so. You know, Slum Village changed and people would ask me why I would add members, and members are what I would add because of family. Illa J, he’s been there from the beginning, it’s all family. It’s not like some random dude coming into Slum Village, who wasn’t there, or who wasn’t part of the process. It’s like a family business, and I’m just the guy who kinda spearheads it all.”

And now a new branch has grown with the pairing of Abstract Orchestra. “Abstract is killin’ it man, they killin’ it. And we working on some things with them too.” Rob and the orchestra should get over to Detroit, Bonafide suggests. Thankfully, T3 agrees. “You should come to Detroit! We got some dope spots, dope studios, a lot of dope shit going on in Detroit.”

Rob grins widely, still bathing in the fact he’s got to work with Slum. “I’ve got a real affinity with Detroit music, I cut my teeth on tour with Martha Reeves…” T3’s eyebrows raise up, and the conversation deepens as they continue to get to know each other, family in the making. 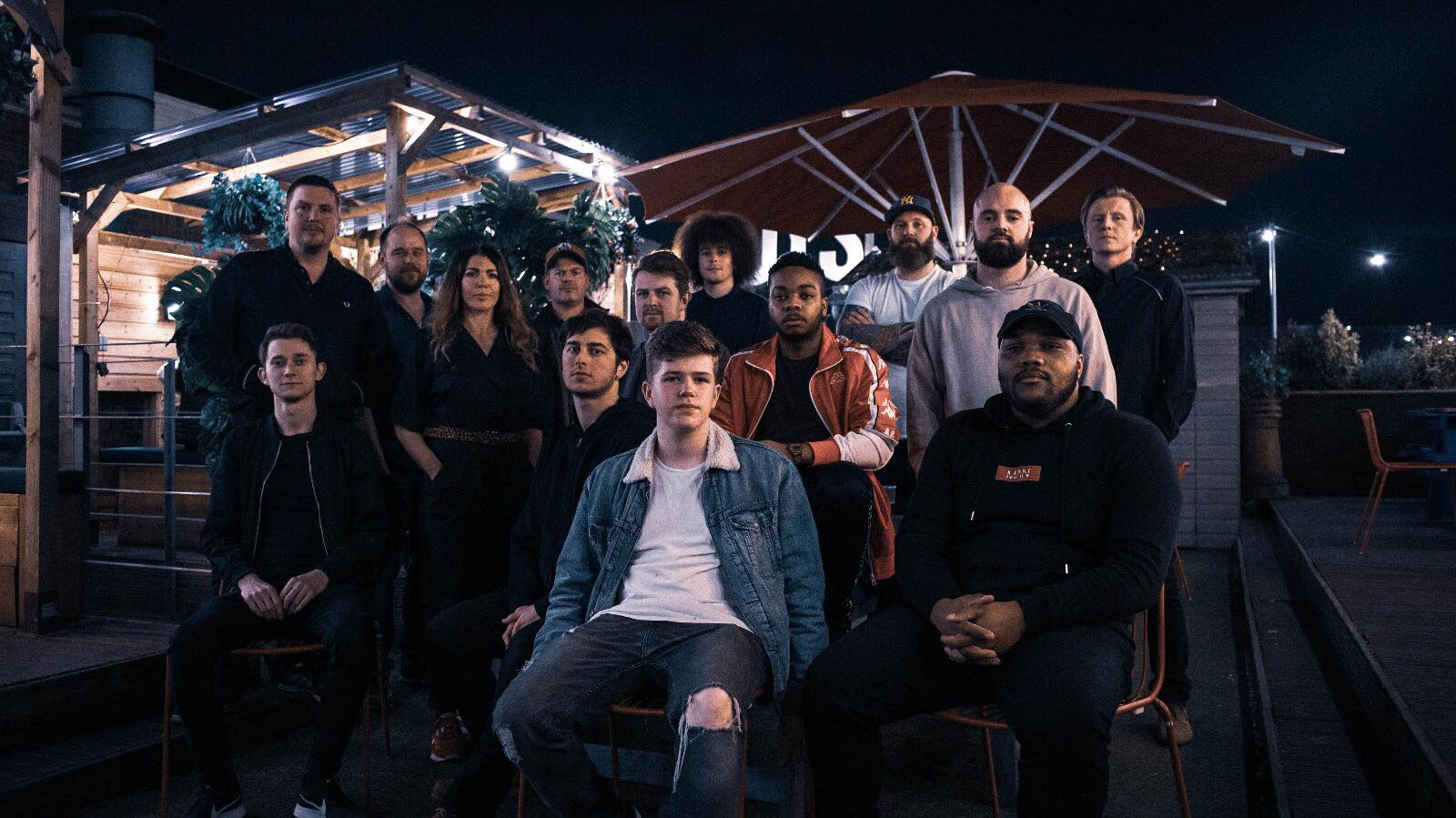 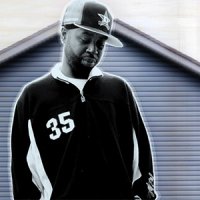 A late shout out: To Dilla 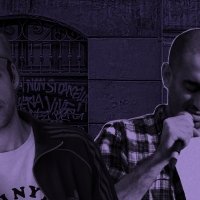