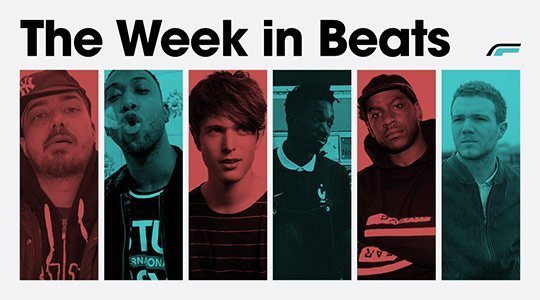 Skepta – Ladies Hit Squad (ft D Double E & A$AP Nast)
Love songs have never been Skeppy’s strong suit, his confusingly rank All Over The House being the nadir of his career to date. But now we have him riding the crest of a wave and Ladies Hit Squad reflects that; A$AP Nast’s nasal hook goes down as smooth as the production, and the video is all fresh white threads, electric pink neon and champagne. Grime goes Miami.
Traumer – Classroom
African and middle eastern-influenced house tracks seem to be cropping up all over the place at the moment, but this booty shaker from Traumer ticks all the right boxes. With djembe finger rhythms leading the way, Classroom builds up beautifully over its 8 minute runtime without giving too much away. Bare to the bones but with shed loads of groove.

James Blake – Modern Soul
With that falsetto that we all know and love so much, our favourite crooner James Blake is back with Modern Soul. With piano chords that are unmistakably his own, steeped in melancholy, he once again lets his voice take centre stage in an exercise of less being more as we heard on Overgrown. Like his last record, Modern Soul doesn’t reveal all at once, and grows on repeated listens.

Miles From Kinshasa – Kaya
Continuing the UK’s penchant for sprawling synth pop, a tradition started by Pet Shop Boys and Depeche Mode in the 80s, Miles From Kinshasa is a singular artist who first turned heads with his perfectly formed debut single IVRY last year. He’s followed it up with Kaya, a sultry r’n’b anthem which marks him out as one to watch this year.

Aesop Rock – Rings
The king of alternative hip-hop, Rhymesayers’ Aesop Rock is back with another gloriously off kilter song, Rings. His spoken word, stream of consciousness style is in full force here, with a stomping beat to accompany it. His new record The Impossible Kid is out in April.

Darq E Freaker – 2C-I
Darq E Freaker has never really aimed for subtlety with his productions – instead he favours loud claps, bombastic drums and skittery 8-bit melodies as heard on his beat for Danny Brow’s Blueberry (Pills & Cocaine). New release 2C-I, forthcoming on Big Dada, apes HudMo and Lone at their most schizophrenic, and feels like you’ve just been blasted into another dimension by Doc Browns’s DeLorean.