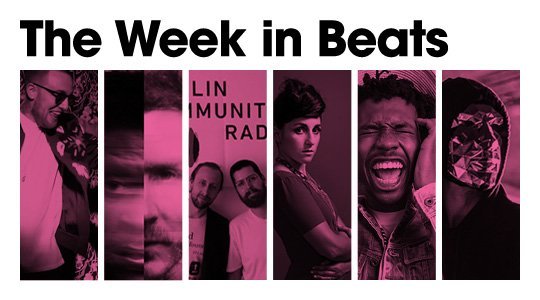 Mood Hut – Better
Vancouver based label Mood Hut have released this corker of a track and its got us wanting to pop bottles and do a dance. With every play, a different piece of cleverly placed production reveals itself, allowing the listener to revel and immerse themselves in the sound even further. Glass in hand, get this one on repeat.
Nite Jewel – Running Out Of Time (Julia Holter Remix)
Julia Holter has replaced the modern funk usually present in Nite Jewel’s tracks with some wholesome ambiance for her remix of Running Out Of Time. Virtuous, peaceful and divine in its delivery, like dust particles floating in the light. A beautiful collaboration by the ladies from L.A.
Massive Attack, Ghostpoet – Come Near Me
The recognizable lethargic, London twang of Ghostpoet sounds so at home on this new Massive Attack track. After previewing Come Near Me on their “sensory remixer” app; Fantom, which takes into consideration your surroundings and adjusts the song accordingly. Massive Attack continue to innovate with cinematic visuals, high profile casting and cold, cold seas for this video.
Mac Miller – Dang! (feat. Anderson .Paak)
Produced by Canadian born, Pomo who also put the soul behind Anderson .Paak’s Am I Wrong has made another banger, Dang! .Paak is methodically and each time more brilliantly laying down vocals for every rapper on the block. So it’s no surprise that our man Mac Miller wanted a bit on the action, but who can blame him, this is too good.

https://www.youtube.com/watch?v=YMi8pXOaR9M
Zomby & Burial – Sweetz
British, electronic divinities “got us fucked up” with this new one. Sweetz explores a murky, sweaty soundscape as if you’ve embarked on the impossible challenge of running away from a bad dream. The journey is a hairy one and once those headphones are on, there’s no escaping the chase.


Raury – NEVERALONE
Raury’s first skydiving experience influenced this song and his admiration for daredevil, Luke Aikins who jumped from 25,000ft with nothing but a net to catch him. Coincidently, Neveralone, holds similar tones to Laurie Anderson’s O Superman from 1982. Is this song less about diving and more about flying?