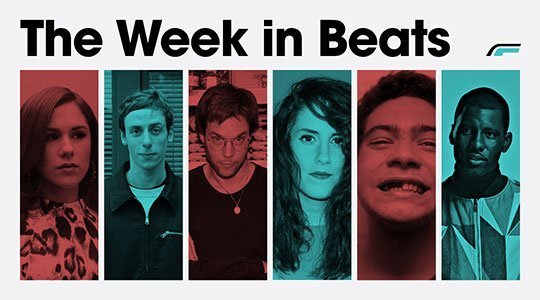 Palms Trax – High Point On Low Ground
One of the hottest properties on the circuit, Palms Trax is fast cementing himself as one of the most consistently excellent producers around (it doesn’t hurt that he’s also a killer DJ). He returns to the esteemed Dekmantel label for three tracker High Point On Low Ground, and just from these little samples it sounds as though he’s found the sweet spot again. The boy can do no wrong.

Katy B x Four Tet x Floating Points — Calm Down
A few eyebrows were raised when this collaboration was announced (who saw it coming, really?). But lo and behold, the trio have moulded together a pop banger that still carries traces of Hebden and Shepherd’s own styles, whilst also laying down a platform for Katy to let rip with her power vocals.

Wretch 32 & Avelino – Fire In The Booth
Now admittedly, Wretch 32 doesn’t have the most sterling reputation in the grime game. But as we’ve seen with Tinie (and Chip to an extent), Fire In The Booth is a great platform for letting the more pop-orientated grime artists showcase their undoubted talent for spitting. One of many highlights: “I can’t swim but I’ll be the anchor for the scene, how do they expect musicians to stay afloat, when all our sales keeping going down the stream?”

Roman Flügel – Essential Mix
Thanks to cuts like Sliced Africa and his remix of Daniel Avery’s All I Need, Roman Flügel has been heralded as one of the most talented house producers to emerge in recent years. So it was no surprose that he was selected to step up to the Essential Mix mantle, and it was also no surprise that he delivers an absolutely stellar session, featuring heavy cuts from the likes of Answer Code Request, Randomer and Cosmin TRG.

Shanti Celeste – SSS (OG Cut)
Bristol’s hotbed of dance music has produced another star in the making in the shape of Shanti Celeste. Good friends with the Idle Hands crew as well as Bristol poster boy Julio Bashmore, her dusty house productions and DJ sets have landed her a release on FunkinEven’s Apron imprint. You can see the shared ground here between the two; SSS (OG Cut) is an analogue, acid-tinged house number with a bit of fire in its belly.

Wiki – Crib Tax
The latest member of Ratking to fly solo, rapper Wiki has put together a mixtape of kitchen sink poetry with track titles like Livin’ with My Moms and Old Blocks New Kids. Tape highlight Crib Tax sees him team up with do-no-wrong producer Kaytranada, for a characteristically low-key affair where Wiki can narrate everyday life in a beautifully nondescript way.