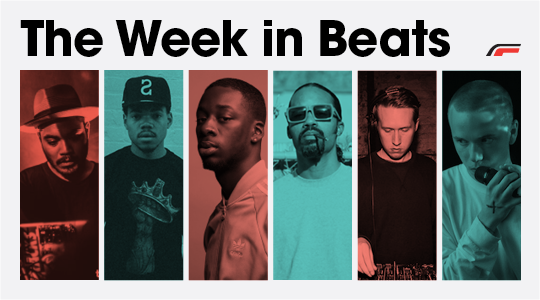 
Joy Orbison & Boddika – TMTT
The odd yet distinctive and undoubtedly logical pairing of these two is proof that genres don’t matter, and that even though the sounds of different producers may not always align, together they can create cohesive harmonies that rings true with each one’s character. For their first collaboration of 2015, the duo presents a single side, white label release, which includes this atmospheric deep house tune.
Dâm-Funk – Free
The godfather of modern funk is back with a new EP, with is free for download through the Stones Throw website. After giving fans two bonus tracks for the new year from his collaboration with Snoop, Dâm-Funk is back with a release of four instrumental tracks. Brimming with his signature erratic electric guitar solos, groove-setting keys and fresh percussion, it is a solo project entirely produced, composed played and recorded by the man himself. Enjoy.
GoldLink – Dance On Me
Prod by Milo Mills, this Goldlink track is upbeat, bounce-drenched and exactly what we’ve been looking for to bring on the warm season. Stay tuned for Bonafide’s exclusive shoot with him in issue 11…
Donnie Trumpet & The Social Experiment – Miracle
We’re digging Chance The Rapper’s new project, The Social Experiment, in which he makes jazzy hip-hop songs with instrumentalist friends like Donnie Trumpet. Starting off ethereal, the song progresses into a triumphant, blissful ensemble as Chance comes in with his signature style of straight up, heartfelt raps—”If I got locked up would you see me til the end of my sentence? White dot.”
Bobby Raps & Corbin – Welcome To The Hell Zone
This first single off Bobby Raps and Corbin’s new record, Couch Potato, is as absorbing as it is intriguing—what happens when the former Spooky Black teams up with his talented rapper friend? Though the EP’s name may suggest an absent minded, mundane feeling, it is filled with menacing, sprawling chords, heavy 808s, Bobby’s deep, buried rapping and Corbin’s characteristic, wail-like, angelic vocals. We’re into it.
Mr Carmack – All In (feat. Kehlani)
As a part of Yours Truly’s “Songs From Scratch” series, Soulection resident Mr Carmack teams up with Bay Area sweetheart Kelahni, to bring us this r’n’b love song, making us feel very nostalgic for early 2000s Cassie.