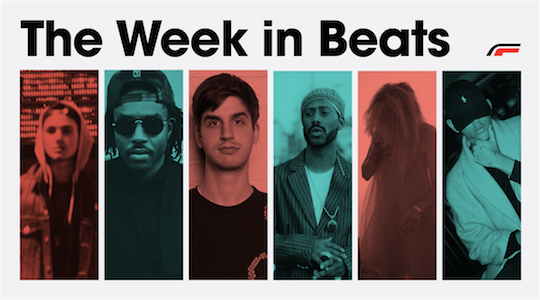 
Kornél Kovács – Pantalón
Forget all of that Jamie xx nonsense, THIS is the song of the summer. An absolute slammer from Kornél Kovács on prodigious Scotland label Numbers, we’ll fight anyone that doesn’t agree with us.
Meek Mill – Monster (Yung Gud Remix)
Part of the Sad Boys crew who have been simultaneously earned a hardcore following and laughed off by arrogant hipsters, Yung Gud has nevertheless been seen as the group’s most talented member. His remix of Meek Mill’s Monster bumps along joyfully whilst still retaining that care-free vibe that the Sad Boys have become associated with.
Golden Rules – Play Some Luther
This tribute to Luther Vandross, who passed away ten years ago this week, is from Paul White and Eric Biddines who together form Golden Rules. “Play Some Luther” features White’s spacious beats mixing perfectly with Biddines’s soulful vocals and rapping, which is echoed by Maya Carlyle’s delicate voice. R.I.P Luther.
Abhi Dijon – 17
Little is known about this duo hailing from Elliot City, Maryland, but their mood-effecting jams have caught the attention of many. Their namesake EP, released last year, had 90s r’n’b swimming dreamily with bouncing, contemporary beats and is laced with Dijon’s soft, melodic vocals. Produced in a similar vein is this new track, 17, though it’s injected with amplified energy, almost in anticipation of the warm weather.

Madlib – Mind Fusion: African Earwax
The big man himself is back with a typically masterful African-themed mix, which was limited to only 30 physical copies pressed onto CD, which were then sold at the recent MF Doom x Jason Jagel “Doomsday Show” in LA. Accompanying each disc was a unique, hand-drawn cover designed by Jagel himself.