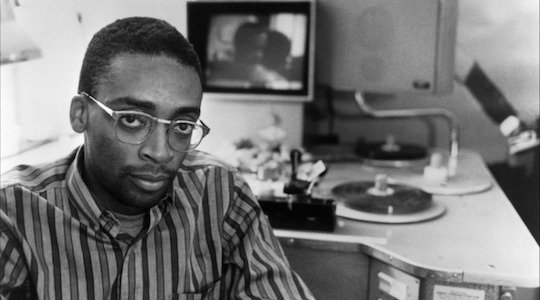 From She’s Gotta Have It to School Daze; Crookyln to Clockers, music plays such a leading role in Spike Lee’s critically acclaimed movies that the scene-stealing songs and scores of the great director’s best features might as well take top billing in his films.

Be it with the whisky-smooth jazz of Mo’ Better Blues or the indignant boom bap of Do The Right Thing, Lee’s films make dramatic use of classic and timely records to tell impactful stories, his excellent scores and soundtracks enlivening his movies with affecting pieces and cues.

Made with a musician’s ear for rhythm, the Chiraq director’s stirring and often challenging films are deeply personal tales of politics and social commentary; engaging movies that weave compelling narratives of beats, rhymes and life with music for a narrator.

Naturally, Lee has occasionally taken his affinity for pairing great visuals with great music from the big screen to the small screen, working with the likes of Anita Baker, Prince and Michael Jackson to make entertaining, eye-catching videos for us all to enjoy.

With this being the outspoken auteur’s birthday month, we’ve decided to take a look at some his best music videos, celebrating the life and career of a pioneering filmmaker. This is us yelling “hip hip hooray!” for a beloved hip hop head, one of the most influential directors to ever pick up a camera: the little man from Brooklyn who gave us Radio Raheem, Señor Love Daddy and Mookie.

Public Enemy – Fight the Power
Produced by The Bomb Squad – the production team behind Public Enemy’s finest work – Fight the Power is one of the greatest songs of all time – a fiery, politically charged anthem booming with disaffection and indignance. An impassioned rallying call of activist rhymes and soul samples, the explosive record inveighs against the discrimination and abuse suffered by minorities and disadvantaged groups, rousing listeners to take up arms in the fight against the great and powerful.

Released in June 1989, the song was recorded at the request of Spike Lee. In need of a fitting number to capture the impassioned, rebellious spirit of his energetic drama, Do The Right Thing – an inflammatory anthem with just about enough vitriol and spark to light up the tinderbox of 1980s Brooklyn – Lee asked Chuck D and his group to come up with a musical theme for the film; the result being PE’s incendiary classic, a timeless cut Rolling Stone famously hailed as the seventh greatest hip-hop song ever recorded.

Channeling the anger and liveliness of Lee’s disaffected characters, Fight The Power adds to the drama and emotion of Do The Right Thing, raising the volume of their protests and cries of discontent. Filmed in Brooklyn, Lee’s vivid visuals for the song are just as dramatic and emotive as the Oscar-nominated classic; the spirited video zooming in on Chuck D and co as they perform a live show in the heart of New York, surrounded by beret-wearing militants and placard-carrying protestors marching from building to building past cop cars and Bedstuy brownstones. A call-back to the Million Man March, Lee’s video – like PE’s song – urges you to get on your feet and take a stand.

Gang Starr – Jazz Thing
Assembling an all-star cast of fine actors led by Denzel Washington, the 1990 musical drama, Mo’ Better Blues, takes to the stage with jazz trumpeter Bleek Gilliam and his band; delving into the relationships and dynamics of the fictional jazz quintet as they strut their stuff and strum their way into the hearts of the cool hep cats and swanky couples of Brooklyn’s nightclub scene.

Boasting an equally impressive line-up of performers, the soundtrack to the film was released in July 1990 and nominated for a Soul Train award the following year. Composed and played by Terence Blanchard and the Branford Marsalis Quartet, the record also features the incredible Gang Starr, who – with the help of Robert Hurst and Kenny Kirkland the pianist – made the delightful Jazz Thing – a classy history lesson of a track recounting the origins of America’s first truly original art form.

Shot in smoky black and white, Spike’s Jazz Thing video travels back in time to the era of zoot suits and pork pie hats, immersing us in the film noir cool and sophistication of old-time jazz clubs; with Guru and Primo decked out in stylish period gear.

Featuring shots of legends like Billie Holiday and Charlie Mingus, the video pays homage to the great blues and jazz acts of yesteryear, providing us with an artful reminder of their impact and influence. Spotlighting Guru’s emceeing and Premier’s scratching, Jazz Thing is as entertaining as it is prophetic, heralding rap’s Jazz Age with The Low End Theory and Main Ingredient just around the corner.

An iconic song, Hip-Hop Hooray is one of the most popular and ubiquitous rap records ever made, a go-to track for fans of all generations, not just ‘80s babies or those lucky enough to have broken it down on a 90s dance floor. Produced by DJ Kay Gee and the Godfather of Gangsta Rap, Eazy-E, it makes nifty use of several samples, looping hits like James Brown’s Funky President, Make Me Say It Again Girl (Part 1 & 2) by The Isley Brothers and Sylvia Striplin’s You Can’t Turn Me Away.

Lee’s upbeat video for Naughty’s crowd-pleasing song finds the East Orange rappers in buoyant mood, turning up with throngs of revellers in what looks like the block party to end all block parties. Featuring appearances by Queen Latifah, Run DMC, Kriss Kross, Eazy-E and Battersea’s finest, Monie Love, Hip-Hop Hooray dares you not to get up on your feet and shake a leg; being so cheerful and catchy, its video endlessly entertaining, even the Muppets couldn’t resist remixing the song and remaking Lee’s video with a hilarious montage of their famous antics.

Michael Jackson – They Don’t Care About Us
Released in March 1996, They Don’t Care About Us is the fourth single of Michael Jackson’s ninth studio album, HIStory. While regarded by die-hard fans as an inspirational protest song drawing attention to a range of socio-political issues, the chart-topping track has historically come in for stinging criticism; stirring up controversy upon its initial release with many alleging the song features antisemitic lyrics.

Just as contentious, Spike Lee’s initial video – shot in two locations in Brazil; Pelourinho and Dona Marta, a favela of Rio de Janeiro – also attracted the ire of state authorities, with officials attempting to ban filming for fear that the video and its depiction of poverty stricken locals might hamper Brazil’s prospects of hosting the 2004 Olympic Games.

Lee’s second video for the song was filmed in a prison and contains footage of police brutality, violent rallies and the protest in Tiananmen Square. However decisive, the song and its videos continue to inspire activists today, with Black Lives Matter protestors across America, from Ferguson to New York, raising their voices with rousing renditions of the song in tribute to the Trayvons, Eric Garners and Mike Browns of the world; placing the emphasis on Jackson’s impassioned refrain and asking, what about them – what about Garner, Ford, Hamilton, Parker, Gurley, Rice, Harris, Gray… “What about us?”

Eminem – Headlights
A touching ode to Ma Mathers, Headlights is Eminem’s heartfelt apology to his mother. Extending an olive branch with the song, the emotive track is the fifth single from The Marshall Mathers LP 2. It finds Em in reflective mood, going over his previous misdemeanours and attempting to make amends with his mom after a long, drawn out and very public feud.

With Lee taking the helm once more, the video for the single was shot in Detroit and released, aptly, on Mother’s Day in the States. Shot in POV style, the video takes a trip down memory lane from the elder Mathers’ perspective, providing what we’re meant to assume is her heart-rending take on her son’s life and success, offering a telling glimpse into their tumultuous relationship.