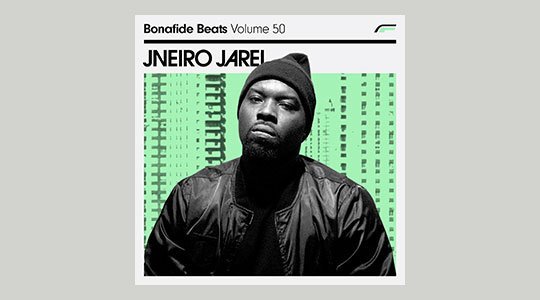 In the almost 5 years Bonafide has been running we have had the privilege of meeting and working with some of our favourite artists (some of whom have recently told us about their favourite artists) but it’s a special thrill when they create something for us. And Jneiro Jarel’s mix for Bonafide – the fiftieth of the series – is just that, a true creation.

Jneiro Jarel first came to our attention via the criminally over looked Georgivania album (2009), as part of the Willie Isz project alongside the rapper Khujo, a record we described as being full of ‘depth, energy and enjoyment.’ In the same year JJ, as he is often warmly referred to, was invited to contribute a mix to Mary Anne Hobb’s respected Radio 1 show as well as remix singles by Bjork, Massive Attack and TV On Radio.

But in fairness JJ had been making a buzz for several years previous, notably through his Three Piece Puzzle (2005) album and the Dr. Who Dat? and Shape of Broad Minds aliases, the latter of which makes a fleeting appearance on the mix. 2012s Keys To The Kuffs, alongside a certain metal-faced villain, amplified Jarel’s reputation, allowing the producer and vocalist the platform to start his own record label, Label Who.

As for the mix, there’s no tracklist, “I’m kinda old school sometimes”, Jarel explains over email but it does contain some exclusives, “namely my new song Landed and (a) JJ DOOM X Dr Who Dat? mash up.”

Elsewhere, there’s Roc Marciano’s 10cc sampling 76 from the Reloaded album, jazz harpist Dorothy Ashby’s ethereal Joyful Grass and Grape, even soft rock via Chicago’s rousing A Hit By Varese and finishes on the macabre no wave of Dirty Beach’s Black Nylon. It is an exhilarating journey and expertly blended mix that showcases the producer’s diverse taste and soulful brand of otherworldly hip-hop.

Keep an ear out for new music from Jneiro’s Label Who? coming soon.